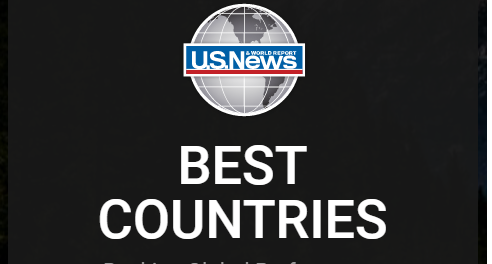 Canada is the best country in the world, according to millennials. U.S. News & World Report today released new data on its Best Countries platform, revealing how 18- to 35-year-olds perceive nations on a global scale. The influential generation has named Germany the No. 2 Best Country Overall, followed by the United Kingdom at No.  3.

Thousands of millennials around the world scored nations on a wide range of criteria, from dating culture to career development.Australia is the No. 1 Best Country to Live, followed by Canada at No. 2 and Italy at No. 3. China is the top country to Start a Career, and Thailand is viewed as the nation with the Most Economic Potential. Millennials ranked Brazil as the No. 1 Best Country for  Dating.

“Millennials will play a significant role in shaping national economies worldwide for decades to come,” said Brian Kelly, editor and chief content officer of U.S. News. “Capturing their perceptions is valuable in helping to determine the current and future possibilities of economic, political and cultural success in  nations.”

The new rankings are part of the Best Countries report, an ongoing multimedia project with U.S. News, WPP’s BAV Consulting and the Wharton School, that evaluates how worldwide perceptions impact national economies. Based on exclusive data gathered from a proprietary survey of more than 16,200 business leaders, informed elites and general citizens, themethodologies incorporate attributes such as affordability, innovation, trustworthiness and gender  ratios.

About Best  Countries
Best Countries is a rankings, news and analysis project created to capture how countries are perceived on a global scale. The rankings evaluate 60 countries across 24 rankings drawn from a survey of 16,200 global citizens, measuring 75 dimensions that have the potential to drive trade, travel and investment and directly affect national economies. Launched January 2016 in partnership with WPP’s BAV Consulting and the Wharton School of the University of Pennsylvania, more than a million people visited Best Countries in its first week of  publication.