When it comes to taste, offerings from 365 Everyday Value, Haagen-Dazs, Dove, and Walgreens led the pack in Consumer Reports latest tests of strawberry fruit bars, ice cream bars and sandwiches.  The report is available online now at www.ConsumerReports.org and in the July 2012 issue of Consumer Reports, which goes on sale Tuesday, June 5.

Consumer Reports tested six brands of strawberry fruit bars—all fat-free with a calorie range of 70 to 110.  Those from 365 Everyday Value (Whole Foods) earned the highest marks in taste-tests and were noted for their large chunks of fruit and big strawberry flavor.  Varieties from Whole Fruit, Dreyer’s/Edy’s, and Blue Bell had a nice fruit flavor but were slightly gummy—those from Weight Watchers and Dole had the lowest scores for taste in this category. 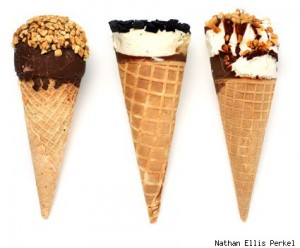 Ice cream bars Haagen-Dazs and Dove were deemed excellent for their creamy texture, strong dairy and vanilla tastes and flavorful coating in Consumer Reports tests of six brands of vanilla ice cream bars covered with dark chocolate. Those from Julie’s Organic were very good—their coating had a cocoa note and was slightly chalky.  Ice cream bars from Klondike, Magnum, and Good Humor were artificial tasting and had texture problems.  The ice cream bars—which were the most caloric and contained the most amount of fat and saturated fat—are more suitable as an occasional treat.

Walgreens Old Fashioned ice cream sandwiches were very good and the only ones that Consumer Reports tested that did not taste of artificial flavors and did not have a gummy texture.  They beat out Klondike Classic and 100 Calorie, Great Value (Walmart), Blue Bunny, Weight Watchers and Skinny Cow for their tasty vanilla flavored ice cream.

For the full Ratings of frozen treats, including cost and nutritional information, visit www.ConsumerReports.org.

Consumer Reports is the world’s largest independent product-testing organization. Using its more than 50 labs, auto test center, and survey research center, the nonprofit rates thousands of products and services annually. Founded in 1936, Consumer Reports has over 8 million subscribers to its magazine, website and other publications. Its advocacy division, Consumers Union, works for health reform, food and product safety, financial reform, and other consumer issues inWashington, D.C., the states, and in the marketplace.