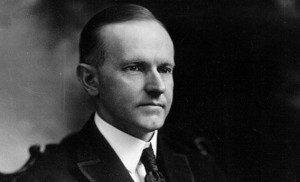 If you believe the Constitution matters, Coolidge should be one of your favorite presidents.

February 22 is George Washington’s birthday. Instead of celebrating the father of our country, we lump him in with the other 43 Presidents call it Presidents’ Day. To see that not all Presidents are equal, look no further than the plethora of presidential rankings through the years: it’s not a 44-way tie for first place.

This raises the question: how should Presidents be evaluated? Most presidential scholars rank our Presidents according to their experience, vision, and leadership skills. Under such rating systems, Progressive Presidents such asTheodore Roosevelt and Woodrow Wilson score in the top ten. Abraham Lincoln and George Washington rate highly, but as recently as 2011, still lose the number one position to big government icon FDR.

Shouldn’t we evaluate Presidents according to their fidelity to the Constitution instead?

All Presidents pledge to “faithfully execute the Office of President of the United States” and to “preserve, protect and defend the Constitution of the United States.” But few evaluators consider the Constitution when rating Presidents: notables examples are Alvin Felzenberg, Forrest McDonald, and Sidney Milkis and Marc Landy. Most recently, in The Politically Incorrect Guide to the Presidents: From Wilson to Obama, Steven Hayward assigns grades of A through F to each President according to a three-part test: 1) the President’s constitutional philosophy; 2) his actions as a reflection of the Constitution’s limits; 3) his judicial appointments.

Judged by this standard of fidelity to the Constitution, some of the traditionally highly-ranked Presidents fail completely. Woodrow Wilson earns an F, along with FDR, LBJ, Carter, Clinton, and the current occupant of 1600 Pennsylvania Avenue, Obama.

Our first professor-turned-President, Wilson disdained the Constitution for being a limited government document. Instead he embraced the theory of the “living Constitution” where the document’s meaning evolves to meet the needs of the times (as interpreted by the Supreme Court). Wilson saw the President not as an executor the laws, but as a visionary leader who would identify the path of progress and set the pace for the American people to achieve it. He encouraged Americans to shed their affection for the separation of powers and instead embrace bureaucracy and Progress (his campaign speech was entitled “What is Progress?”).

Say what you will about Wilson, at least he was upfront about his contempt for the Constitution. FDR cloaked himself in the Founders as he undermined their legacy. FDR claimed that his expansion of government and redefinition of rights were in keeping with the legacy of Thomas Jefferson and his intellectual heirs, Theodore Roosevelt and Woodrow Wilson.

Though FDR and Wilson flunk, one President earns an A+—Calvin Coolidge.

Coolidge had a well-developed political philosophy of limited government constitutionalism. He used his rhetorical skills to challenge his progressive contemporaries. He cemented his limited government legacy by cutting taxes and resisting calls for expansive government subsidies and disaster relief. One would expect a Reagan scholar to reserve his highest praise for the Gipper, but Calvin Coolidge’s principled constitutionalism earns Hayward’s highest grade.

For practical purposes, Hayward analyses Presidents from Wilson onward. But, how would George Washington rate under this rubric? As our first President, Washington set the precedents that define what it means to be a constitutional executive. A strong, energetic President who was aware of the limits on his office, he deferred to Congress when appropriate but aggressively defended his prerogatives when necessary. For instance, Washington exercised his veto power twice, not on policy grounds, but for constitutional reasons. His judicial appointments were top notch: including John Jay, a co-author of theFederalist, and James Wilson, whose Lectures on Law contain some of the period’s most profound commentary on the Constitution and American law. There’s no doubt that Washington would earn an A+.

This weekend, the historians will no doubt return to the same vacuous criteria to rank Presidents. Coolidge won’t receive an A+, Wilson an F, or JFK a gentleman’s C. We will probably hear more about leadership and charisma (the swimsuit competition equivalent in presidential rankings). Nevertheless, let’s remember that not all Presidents are equal—especially when it comes to their fidelity to the Constitution.