By Carolyn Knight, Special for US Daily Review.

As we all know by now, the Internet has been a very disruptive force in the business world. Sites like Amazon have changed brick and mortar retail forever, and there are several examples of businesses that simply could not survive in the new landscape. The U.S. Post Office has been hit hard by the new reality. 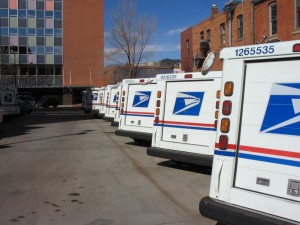 This week the postal service announced that it lost a staggering $3.2 billion from January to March of this year. The loss is in part due to rising costs in the form of retirement benefits and fuel, to name two, but people and businesses are also sending less first class mail. It shouldn’t come as a surprise that people are sending less when they can achieve the same thing with an email, and businesses can reach out to customers directly instead of sending out mailers.

Previously, the postal service had announced it was going to shutter thousands of offices across the country. The backlash from politicians and citizens was immediate. Officials also announced a modification to this plan that would keep most of the offices open, albeit with shorter hours. That measure isn’t going to make up for the shortfall, so the agency and politicians have been looking for another way to cut costs.

The Senate has already passed a bill that gives the agency access to a retirement surplus fund and the ability to restructure health benefit plans. The legislation still needs to pass a vote in the House of Representatives before it can take affect, however, and the vote hasn’t been scheduled yet. The agency has also offered up the idea to discontinue Saturday mail but it hasn’t pursued that option as of yet.

Postal service officials said they would not be able to meet future debt obligations unless some kind of legislation is passed to help solve the solution. The one area where the agency is growing is in shipping, but it isn’t enough to offset the lost revenue from other areas that are losing volume. Regular mail is down to 39.5 billon pieces annually, which is about 4 percent lower than last year.

There was once a time when it was inconceivable to think the post office’s business would fail, but that’s exactly what’s going to happen if changes aren’t made soon. The days of getting a letter in the mail might be a thing of the past soon.

Carolyn Knight is a guest author who writes about business and how to use order management tools that work with Shopify, 3dcart, and BigCommerce.