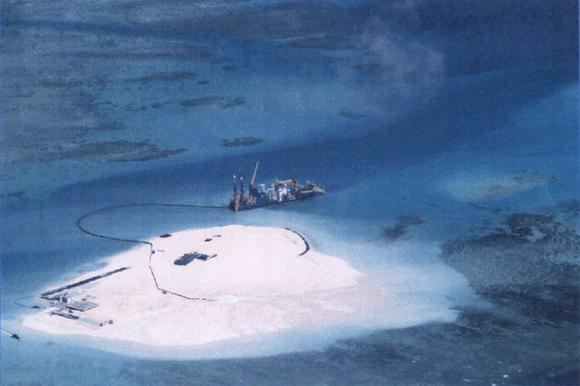 It is one of the most flagrant atrocities in modern times.

The perpetrator did not report it but, surprisingly, neither did the victim. On June 2012, a video of the incident was released. It was done so, by the perpetrator, raising the question as to why.

It was March 1988; the countries involved were China and Vietnam. The incident took place in the South China Sea where a dispute between the two over ownership of the Spratly Islands was ongoing and exists to this day. The Spratlys are an archipelago of approximately 750 reefs, islets, atolls, and islands.

In anticipation the Chinese would attempt to occupy the reefs, two Vietnamese transport ships, HQ-604 and HQ-605, carrying 73 Vietnamese soldiers were ordered to land workers there to begin the construction of forts.

Vietnamese soldiers landed on Gac Ma reef, known on Western maps as the Johnson South Reef, on the evening of March 13. It was there that the incident took place.

The two Vietnamese transport ships presented only a cursory military threat. They were commercial vessels pressed into service to carry troops and construction materials and, as such, were lightly armed. They had to be within 500 meters of a target for their guns to be effective.

With Vietnamese forces dropped there, the two transport ships headed for the other two atolls.

As dawn came, Chinese warships approached the reefs. Not only did they have their own landing force aboard transport ships but their accompanying destroyers provided ample fire power to support them ashore.

Vietnamese flags had been raised on Johnson South reef and, by this time, on one other atoll, Co Lin.

Around 6 am, several small assault boats, each loaded with well-armed marines, were launched from the Chinese transport and headed for Johnson South Reef.

The Vietnamese immediately formed a 360 degree defensive perimeter with their flag in the center—in a configuration dubbed “the immortal circle”—demonstrating their resolve to defend the reef at all costs.

The Chinese unsuccessfully attempted to penetrate the perimeter.

Lieutenant Phuong grabbed the Vietnamese flag to prevent its capture, he was shot in the head. It was immediately picked up by Nguyen Van Lanh, who held on to it until he was repeatedly stabbed and shot. Miraculously surviving his attack, and as the Chinese withdrew, he and other survivors found themselves subjected to an intense naval bombardment and machine gun fire.

Simultaneously, the bombardment was directed at the Vietnamese transports which, as expected, proved incapable of returning return fire as the Chinese ships remained well out of range.

What is most disturbing about the video is what happened next. At this point, the Vietnamese survivors on the reef posed absolutely no threat to the Chinese. But the video shows Chinese naval gunfire being concentrated on Johnson South Reef where the survivors had no cover.

Gunfire rakes the reef as the defenseless Vietnamese stoically stand, awaiting the final onslaught—their fate sealed as one-by-one they fall into the water in defense of their soil. For Chinese attackers, the challenge was the proverbial “shooting fish in a barrel.”

The video leaves one in disbelief. The Vietnamese were sitting ducks. One can only sense the helplessness they felt as the Chinese mercilessly began to cut them down. Nine Vietnamese survivors were held for three years.

Today, China occupies the reef on which it has built a base and is constructing an airfield.

The Vietnamese lost 64 courageous soldiers that day. Among the survivors was the badly wounded Lanh.

But why would China, after 24 years of silence, release the video?

The answer lies with China’s Haiyang Shiyou 981, a semi-submersible oil rig deployed on May 2, 2012 in the South China Sea near the Paracel islands—another island chain, whose ownership is also disputed by the two countries. The move by China triggered a number of confrontations at sea between the two.

A month later, China unabashedly released the video as a veiled threat to Vietnam that what happened in 1988 could happen again.

Clearly China intends to use the threat of its military might—unchallenged by any of its regional neighbors—rather than diplomacy to “negotiate” the ownership issue.

While the 1988 atrocity by China at Johnson South Reef was the massacre “not heard ‘round the world,” Beijing’s subsequent brazen release of a video documenting it provides another chance to ensure this time it is.

A retired Marine, Lt. Colonel Zumwalt served in the Vietnam war, the U.S. invasion of Panama and the first Gulf war. He regularly writes oped pieces on foreign policy and defense issues for various publications. He is the author of three books: “Bare Feet, Iron Will—Stories from the Other Side of Vietnam’s Battlefields,” “Living the Juche Lie: North Korea’s Kim Dynasty” and “Doomsday: Iran—The Clock is Ticking.”