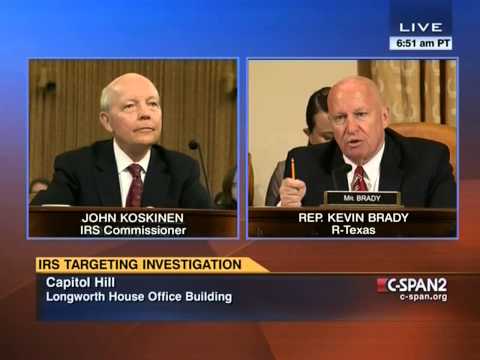 “Today, Commissioner Koskinen confirmed through his contradictory testimony that he withheld key evidence from the congressional investigation into IRS targeting, and intentionally misled the committee when he promised in May to deliver all of Ms. Lois Lerner’s emails without limitation.
“His continued claim that none of Ms. Lerner’s emails have been lost is contradicted by the IRS’s newest invention – that her hard-drive and server containing key years of emails has been irretrievably damaged and lost, along with the emails of six other key figures in the IRS investigation. That’s simply not believable.
“Given the clear evidence of criminal violations and confirmed pattern of untruthful agency statements, Commissioner Koskinen now leads the most corrupt and deceitful IRS in the history of the agency. It’s apparent he is no longer working for the American people, but it is one more in a long line of recent acting IRS commissioners whose main purpose is to mislead investigators and cover up this scandal.
“While Commissioner Koskinen and Congressional Democrats believe he is the victim and is owed an apology for being pressed to provide truthful answers into the investigation of IRS targeting of Americans for their political beliefs, I say he owes the targeted taxpayers an apology for the IRS trying to silence their voices.”
VIDEO: Brady to Koskinen: “This is the most corrupt and deceitful IRS in history.” http://bit.ly/1npdTSg

1- Congressman Kevin Brady, a senior member of the House Ways and Means Committee, points to a letter that shows that the Treasury was made aware of the lost emails before Congress was informed, noting that the Treasury urged the IRS to make Congress aware immediately.

2-IRS Commissioner John Koskinen responds to questions from Texas Congressman Kevin Brady
All opinions expressed on USDR are those of the author and not necessarily those of US Daily Review.