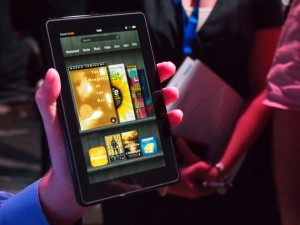 “comScore is excited to introduce our next generation Device Essentials product, which provides  new insight into digital device usage and detailed reporting of traffic patterns within local markets,” said Serge Matta, comScore president of mobile & operator solutions. “These new insights are invaluable to all stakeholders in the mobile ecosystem as they seek to provide valuable services and optimize the mobile media experience for their customers.”

Amazon Kindle Fire Doubles its Share of Android Tablet Market in Two Months
The Kindle Fire, introduced to the market in November 2011, has seen rapid adoption among buyers of tablets. Within the Android tablet market, Kindle Fire has almost doubled its share in the past two months from 29.4 percent share in December 2011 to 54.4 percent share in February 2012, already establishing itself as the leading Android tablet by a wide margin. Samsung’s Galaxy Tab family followed with a market share of 15.4 percent in February, followed by the Motorola Xoom with 7.0 percent share. The Asus Transformer and Toshiba AT100 rounded out the top five with 6.3 percent and 5.7 percent market share, respectively.

Larger Screen Tablets See Higher Level of Content Consumption
Tablet adoption among U.S. consumers continues to climb as more devices appealing to various price and feature preferences are introduced to the market. Screen size is perhaps the most outwardly apparent differentiator between devices, with the market offering consumers a wide variety of options such as the 10″ Apple iPad, 9″ Sony S1, 7″ Amazon Kindle Fire and 5″ Dell Streak. Analysis of page view consumption by screen size found a strong positive association between screen size and content consumption. Specifically, 10″ tablets have a 39-percent higher consumption rate than 7″ tablets and a 58-percent higher rate than 5″ tablets.

Although many factors – such as demographics, content availability, connection speed and ease of portability – may influence consumption levels, the results of this analysis highlight important questions for the industry as the tablet space develops. With the emergence of a growing number of smaller-sized tablet devices, advertisers and publishers will need to understand whether these devices limit the opportunity for advertising compared to their larger-screen counterparts, or if they are able to build incremental reach and engagement by presenting different use cases.

Smartphone Carrier Market Share Shows Variation Across Key States
Among the new capabilities introduced in Device Essentials is the ability to segment data into custom geographies to provide more granular insights into local market device usage. comScore analyzed the share of unique smartphone devices among the top four carriers in the most populous U.S. states and found significant variation between markets. Looking exclusively at the top four carriers, AT&T accounted for the largest share of unique smartphones in Texas (46.2 percent), California (42.9 percent) and Illinois (42.1 percent), while Verizon claimed the top spot in New York (43.6 percent) and Florida (36.5 percent). The greatest disparity in carrier share between AT&T and Verizon occurred in Texas, where AT&T’s smartphone share was more than double that of Verizon’s share.

These are “forward looking statements” and not actual predictions of future performance.

Sponsor: Get the latest in technology news from PCMag.com!