The following is from ABC News: 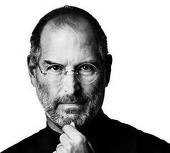 “We are deeply saddened to announce that Steve Jobs passed away today,” read a statement by Apple’s board of directors. “Steve’s brilliance, passion and energy were the source of countless innovations that enrich and improve all of our lives. The world is immeasurably better because of Steve. His greatest love was for his wife, Laurene, and his family. Our hearts go out to them and to all who were touched by his extraordinary gifts.”

The homepage of Apple’s website this evening switched to a full-page image of Jobs with the text, “Steve Jobs 1955-2011.”

Clicking on the image revealed the additional text: “Apple has lost a visionary and creative genius, and the world has lost an amazing human being. those of us who have been fortunate enough to know and work with Steve have lost a dear friend and an inspiring mentor. Steve leaves behind a company that only he could have built, and his spirit will forever be the foundation of Apple.”

Jobs co-founded Apple Computer in 1976 and, with his childhood friend Steve Wozniak, marketed what was considered the world’s first personal computer, the Apple II.