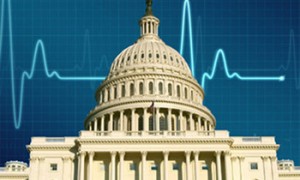 The Supreme Court decision which makes health care reform (Obamacare) constitutional is as controversial as the original law. Was it the right or wrong decision? The country will remain divided in the answer but we should collectively recognize the even more significant question – Is the Supreme Court decision guided and influenced by Washington politics? According to Rasmussen Reports, I’m not the only one questioning this; by a 51% to 28% margin, Americans believe Supreme Court justices have their own agenda and are unable to be impartial. Most other polls are consistent with this result and indicate Americans believe justices vote their politics and are often corrupted by special interests.

The Supreme Court justices have decided many, many cases with a 5-4 vote. I believe we’re all fairly accustomed to how justices vote; liberal judges vote left and conservative judges vote right. If the U.S. Constitution is black and white, why do the Supreme Court Justices only see shades of grey?How can these intellectually brilliant men and women each look at the same document and each come back with a different decision? Is the Constitution just another legal document that is left up to the interpretation of all who read it? Let’s assume for a moment that the U.S. Constitution is not a conclusive declaration, but a document to be interpreted however by conscience and beliefs. In the grand scheme of our forefathers vision, might this be part of their plan for our democracy? Listen, I’ve often questioned how nine men or women could review the same document and come up with such different outcomes. I’ve come to the conclusion that the U.S. Constitution is a document which provides the framework and foundation for our great democracy and that it should be left to the interpretation of the Supreme Court Justices.

KEVIN PRICE AND MALCOLM OUT LOUD DISCUSS THE COURTS DECISION

AND MORE DURING PRICE OF BUSINESS SHOW

With that said, it’s not possible to pull the liberal out of a democrat or the conservative out of a republican. Nomination to the Supreme Court is the responsibility of the President, with the approval of the senate of course. Every President wishes to promote their political party and their political ideology, so when it comes to nominating to the Highest Court in the land – it’s an easy decision for the President. The method of nomination to the Court guarantees that political ideology will influence controversial issues and decisions. One sure way to avoid this outcome is to only allow independents to the Supreme Court. A set of parameters would be set in place to qualify the independent status of these officials. An independent body would appoint to the Supreme Court, not the President. This would virtually guarantee that the Supreme Court Justices not be indebted to any political party or cause and that their interpretation of the U.S. Constitution be based solely upon law. I would also like to see the Supreme Court expanded from 9 to 19 Justices. This would keep a couple of bad apples from rotting the entire orchard.

The question most people are asking is why did Chief Justice John Roberts, clearly a conservative minded man, vote to the left on one of the most important and controversial issues of his career?!? After all, Justice Roberts was nominated to the High Court by Republican President George W. Bush. The attorneys for the Federal Government swayed Roberts when they argued that the fees were indeed a tax. (Never mind that the President had made it clear that these fees were never going to be a tax, this was a legal argument now – not a political one.) It came down to the conclusion that the penalty for not buying insurance is a tax, or the equivalent of a tax, which Congress has the authority to impose under the Constitution.

The underlying message from Chief Justice Roberts was that his court is an independent branch of government whose central role is to enforce the Constitution – period. Roberts was willing to deny the conservative party a victory if it protected his court and his legacy. In an election year, Roberts choose to leave the future of Obamacare up to the voters. Harvard Law Professor and constitutional scholar Laurence Tribe said “Roberts saved the day and perhaps the court”. I concur with Professor Tribe; Chief Justice Roberts protected the integrity of the role of the third branch of government. The Supreme Court must be non-political and non-bipartisan at its core in order to serve the best interests of the citizens.

The ideological divide in America should not be the basis for law or constitutional interpretation. The High Court must determine right or wrong, justice or injustice, for all citizens – not just the majority based upon the current election season. In contrast, politicians make decisions which reflect the sentiment of his or her constituency. Let’s keep ideology out of law. After all the U.S. Constitution was not written by Democrats or Republicans, it was written by Americans.
About Malcolm Out Loud. Social and political news commentator Malcolm Out Loud is also the host of WebTV show Malcolm Out Loud TV, an acclaimed motivational speaker, founder of Brink Thinking and the author of the book Smash The Competition. More about him at www.MalcolmOutLoud.TV