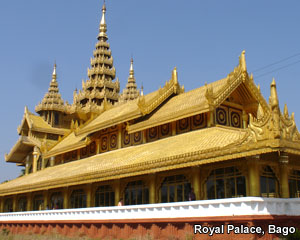 Myanmar (often referred to as Burma by opponents of the current regime) is known for political oppression and poverty under the rule of the world’s longest-lasting military dictatorship. But a University of Dayton music professor reveals a different side of the country: a vibrant pop music industry.

The pop music scene is producing national celebrities and Burmese versions of hits by Western artists such as Shakira, Celine Dion and Snoop Dogg, according to ethnomusicologist and Burmese culture expert Heather MacLachlan in her book Burma’s Pop Music Industry: Creators, Distributors, Censors, released this month by University of Rochester Press.

She discovered a sound that is extremely similar to American and British top-40 hits, sometimes copying music and melodies exactly, rewriting only the lyrics. Occasionally the lyrics will be pro-democracy, but the message is always subtle because of the threat of censorship, she said. More often, the lyrics focus on common themes like love, friendship and family. The first major Burmese pop music hit was in 1969, “Mummy, I want a girlfriend,” MacLachlan said.

“I went to Burma to study traditional forms of music making, but I discovered a vibrant pop music industry that everyone was listening to. It was deeply meaningful to millions of people,” she said. “This is a rare look into Burmese culture, especially because the country is so difficult to access.”

She recalls attending a concert for one of the country’s most respected bands that played a copy of Collective Soul’s “December” with eerie exactness, while expressing Burmese ideas using Burmese lyrics. She encountered similar examples of what she calls “copy songs,” featuring Burmese lyrics to songs by Hilary Duff, Snoop Dogg and The Eagles.

“Some criticize the music as derivative and a pale, washed-out imitation, but if you are disrespectful to someone’s music making, you are really disrespectful to that person,” MacLachlan said.

She said one artist told her they find Western hits to be beautiful pieces of music.

“But you can’t buy Lady Gaga or Madonna,” the artist told her. “And even if you could, you wouldn’t understand the words. We’re making this music accessible to an audience so they can enjoy it.”

MacLachlan gives several reasons for why Burmese pop music is so similar to music in the West:

“Their culture places a value on imitation rather than innovation, and they do not have our belief that authenticity derives from originality, so they create songs that are truly their own while also being explicit copies of English hits,” MacLachlan said. “It is a legitimate way of revealing their hearts to the world.”

Because of Myanmar’s political climate, the government has a heavy hand in the music industry. The military junta at first opposed the new music, but they recognized its popularity early on and began using it in the 1970s for propaganda. Today, the government often enlists popular artists to record songs about getting vaccinated or some other public service announcement; and it requires all songs to be submitted to a state censor board.

Artists must walk a fine line between cooperating with the regime and staying true to their fans and to the music, MacLachlan said. Most of the people she interviewed said recording for the government is “selling out,” but she spoke to one artist who had spent time in prison for writing pro-democracy songs. He now records for the government and tries to avoid any controversy.

Stories of artists singing about resistance or subversion of the government are rare, she said. Even those who do oppose the regime through music do so with subtle language.

“Some scholars give the impression that rock and roll artists are either freedom fighters or they’re just a bunch of patsies cooperating with the regime, but the truth is neither of those,” MacLachlan said. “They are doing the best they can in a really difficult situation.”

Despite the government’s best efforts, however, MacLachlan did find examples of resistance and avoidance of the censorship system. Ethnic minority Christians have established their own recording industry, producing music in one of the many minority languages in the country. Burmese refugees living abroad will also record music in the U.S. or U.K. and then post it to YouTube or e-mail it to people back inside the country.

Although Myanmar’s music industry is not mounting major resistance to the government, it is contributing to the greater good. MacLachlan said most of the artists she interviewed give a lot of money to support victims of natural disasters. They also perform many free concerts.

“It’s not just a business for these artists, it’s a way of life. They are good people who do their best to help their fellow countrymen and women.”