By NCPPR, Special for USDR 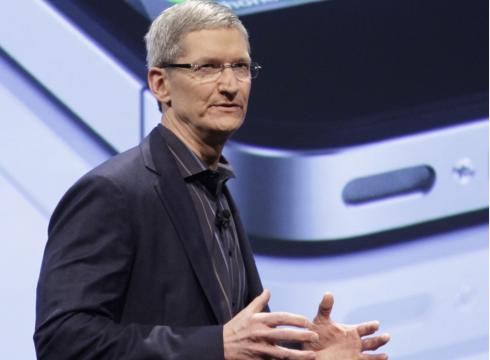 At today’s annual meeting of Apple shareholders in Cupertino, California, Apple CEO Tim Cook informed investors that are primarily concerned with making reasonable economic returns that their money is no longer welcome.

“Mr. Cook made it very clear to me that if I, or any other investor, was more concerned with return on investment than reducing carbon dioxide emissions, my investment is no longer welcome at Apple,” said Justin Danhof, Esq., director of the National Center’s Free Enterprise Project.

Danhof also asked Apple CEO Tim Cook about the company’s green energy pursuits. Danhof asked whether the company’s environmental investments increased or decreased the company’s bottom line. After initially suggesting that the investments make economic sense, Cook said the company would pursue environmental goals even if there was no economic point at all to the venture. Danhof further asked if the company’s projects would continue to make sense if the federal government stopped heavily subsidizing alternative energy. Cook completely ignored the inquiry and became visibly agitated.

Danhof went on to ask if Cook was willing to amend Apple’s corporate documents to indicate that the company would not pursue environmental initiatives that have some sort of reasonable return on investment – similar to the concession the National Center recently received from General Electric. This question was greeted by boos and hisses from the Al gore contingency in the room.

“Here’s the bottom line: Apple is as obsessed with the theory of so-called climate change as its board member Al Gore is,” said Danhof. “The company’s CEO fervently wants investors who care more about return on investments than reducing CO2 emissions to no longer invest in Apple. Maybe they should take him up on that advice.”

“Although the National Center’s proposal did not receive the required votes to pass, millions of Apple shareholders now know that the company is involved with organizations that don’t appear to have the best interest of Apple’s investors in mind,” said Danhof. “Too often investors look at short-term returns and are unaware of corporate policy decisions that may affect long-term financial prospects. After today’s meeting, investors can be certain that Apple is wasting untold amounts of shareholder money to combat so-called climate change. The only remaining question is: how much?”

The National Center’s shareholder resolution noted that “[s]ome trade associations and business organizations have expanded beyond the promotion of traditional business goals and are lobbying business executives to pursue objectives with primarily social benefits. This may affect Company profitability and shareholder value. The Company’s involvement and acquiescence in these endeavors lacks transparency, and publicly-available information about the Company’s trade association memberships and related activities is minimal. An annual report to shareholders will help protect shareholder value.”

The National Center filed the resolution, in part, because of Apple’s membership in the Retail Industry Leaders Association (RILA), one of the country’s largest trade associations. In its 2013 “Retail Sustainability Report,” RILA states: “Companies will often develop individual or industry voluntary programs to reduce the need for government regulations. If a retail company minimizes its waste generation, energy and fuel usage, land-use footprint, and other environmental impacts, and strives to improve the labor conditions of the workers across its product supply chains, it will have a competitive advantage when regulations are developed.”

“This shows that rather than fighting increased government regulation, RILA is cooperating with Washington, D.C.’s stranglehold on American business in a misguided effort to stop so-called climate change,” said Danhof. “That is not an appropriate role for a trade association.”

“Rather than opting for transparency, Apple opposed the National Center’s resolution,” noted Danhof. “Apple’s actions, from hiring of President Obama’s former head of the Environmental Protection Agency Lisa Jackson, to its investments in supposedly 100 percent renewable data centers, to Cook’s antics at today’s meeting, appear to be geared more towards combating so-called climate change rather than developing new and innovative phones and computers.”

After Danhof presented the proposal, a representative of CalPERS rose to object and stated that climate change should be one of corporate America’s primary concerns, and after she called carbon dioxide emissions a “mortal danger,” Apple board member and former vice president Al Gore turned around and loudly clapped and cheered.

“If Apple wants to follow Al Gore and his chimera of climate change, it does so at its own peril,” said Danhof. “Sustainability and the free market can work in concert, but not if Al Gore is directing corporate behavior.”

“Tim Cook, like every other American, is entitled to his own political views and to be an activist of any legal sort he likes on his own time,” said Amy Ridenour, chairman of the National Center for Public Policy Research. “And if Tim Cook, private citizen, does not care that over 95 percent of all climate models have over-forecast the extent of predicted global warming, and wishes to use those faulty models to lobby for government policies that raise prices, kill jobs and retard economic growth and extended lifespans in the Third World, he has a right to lobby as he likes. But as the CEO of a publicly-held corporation, Tim Cook has a responsibility to, consistent with the law, to make money for his investors. If he’d rather be CEO of the Sierra Club or Greenpeace, he should apply.”

“As in the past, Cook took but a handful of questions from the many shareholders present who were eager to ask a question at the one meeting a year in which shareholder questions are taken,” added Ridenour, “leaving many disappointed. Environmentalism may be a byword at Apple, but transparency surely is not.”