The Gang of Eight immigration bill, S.744, is on its way to the Senate floor for a vote, possibly as early as the week of June 10.

The bill was drafted in secret by eight senators and a group of Washington lobbyists. After its introduction on April 17, it received minimal scrutiny at a handful of hearings stacked with supporters of amnesty for illegal aliens and cheap labor for business interests, followed by a hasty Judiciary Committee mark-up in which virtually no substantive amendments were adopted. 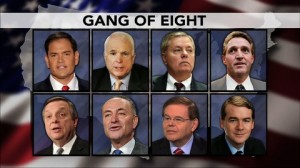 “The product of this rigged and secretive effort to hijack American immigration policy under the guise of reform is a bill that can best be described as the mother of all legislative train wrecks,” declared Dan Stein , president of the Federation for American Immigration Reform (FAIR). “S.744 includes a massive amnesty for millions of illegal aliens, a massive infusion of foreign labor to compete with skilled and low-skilled American workers, trillions of dollars in unfunded liabilities, and unprecedented discretionary authority for the Obama administration to ignore immigration laws. What the Gang of Eight bill does not include are mandates for border enforcement, or meaningful protections for American workers.”

In anticipation of the bill heading to the Senate floor for debate, FAIR has compiled a list of the Top 40 Reasons to Oppose the Senate Amnesty Bill, including:

The bill would not secure our borders or improve immigration enforcement:

The bill would not enhance homeland security, or prevent legalization of criminals and terrorists:

The bill would not protect U.S. workers or taxpayers:

The bill poses an enormous unfunded liability for U.S. taxpayers:

The full list of the Top 40 Reasons to Oppose the Gang of Eight Amnesty Bill can be found on FAIR’s website, www.fairus.org.

The Federation for American Immigration Reform (FAIR) is a national, nonprofit, public-interest, membership organization of concerned citizens who share a common belief that our nation’s immigration policies must be reformed to serve the national interest. Visit FAIR’s website at www.fairus.org.