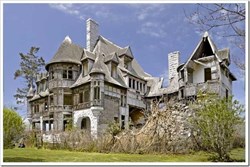 There’s an October chill in the night air and a full orange moon over Boot Hill. A pack of wild hounds howl in the distance as the mountain winds whistle through the empty streets. A piano plays something familiar from the old saloon, but the town is empty. Where did the people go? Who would ever want to buy a Colorado ghost town?

It’s that time of year again when ghosts and goblins walk among us and the frightening ‘Top Ten Haunted Homes for Sale’ list comes out! Scary homes people can actually buy.

Nothing brings about more terror than the homes of horror from books, the silver screen, or even the scary mansion down the street where no living human has been seen for years. From the Amityville house to the House on Haunted Hill, maniacal mansions and towns have struck fear in hearts since childhood. What if these Hollywood horrors are more than just the imagination of a writer trying to think up the next big scare? Could that brand new dream home really become the place of nightmares?

This year’s “Haunted Homes For Sale” list has ten ‘spooktacular’ listings that might raise the hair on the backs of the necks of even the bravest home buyer! Perhaps with Ma Barker’s ghost in the Florida lake home where the longest shootout in the history of the FBI took place. A horrendous mansion on a deserted island in Upstate New York, or the West Virginia site where John Brown met his demise in 1859. Perhaps one of New Orleans’ oldest homes where a Turkish Sultan and his entire harem were murdered in the 1800s? How about a beautiful Hollywood Hills home where Ozzie Nelson’s ghost still lives? Or one of the world’s most famous mansions in Miami Beach, where a serial killer finished his crime spree by murdering the king of fashion? No one ever said owning a home was easy. What difference could a few ghosts make?

Top 10 Haunted Homes feature including high res photos and script (use as is or change) available at:http://bit.ly/toptenmedia.