Twenty years after Los Angeles burned in riots stoked by ethnic tensions and animosity between the police and many residents, Angelenos show signs of optimism about race relations and crime in their city, according to a new poll.

But the survey, conducted by LMU’s Thomas and Dorothy Leavey Center for the Study of Los Angeles, also revealed pessimism about the city’s future, as well as a small but lingering ethnic divide over how well the diverse population of Los Angeles gets along. 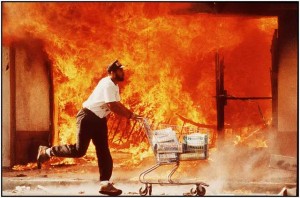 “We see a lot of positive signs in the results of this survey,” said Fernando Guerra, director of the center and professor of political science and Chicana/o studies at LMU. “Angelenos are getting along better with each other, expressing confidence in their police department and feeling safer in their neighborhoods. There are some negative results, but much of that can be attributed to the overall direction of the national economy.”

The Center has conducted surveys about race relations, crime, and the city’s outlook every five years since 1997, the fifth anniversary of the unrest. The most recent snapshot comes from a telephone survey of 1,605 residents conducted from Feb. 1 to March 2. The margin of error is +/- 2.45 percent.

Among the survey’s findings:

Intriguingly, respondents in neighborhoods that were hit by the riots were less likely to predict future rioting than those who live elsewhere in the city – 35 percent versus 44 percent.

“One factor that could explain the response of those in riot areas is their awareness of the continued impact of the riots, in the physical, economic, and social sense,” Guerra said. “The people who lived through the riots and who live in those neighborhoods now have a much keener sense of the costs of such unrest.”

Copies of the survey results are available at the Center website, http://www.lmu.edu/csla. Also, journalists in search of more detailed information on the data can contact the Center directly at 310.338.4565.

According to a statement, Loyola Marymount University, “located between the Pacific Ocean and downtown Los Angeles, Loyola Marymount University is a comprehensive university offering 60 major programs, 38 master’s degrees and a doctoral degree in education from four colleges, two schools and Loyola Law School. Founded in 1911, LMU is ranked fourth in “Best Regional Universities-West” by U.S. News & World Report. LMU is the largest Jesuit Catholic university for undergraduates on the West Coast, with nearly 5,800 undergraduate students and more than 3,000 graduate and law students. For more LMU news and events, please visit www.lmu.edu/news.”