Writing in one of America’s top conservative publications, The American Spectator, commentator Peter Hannaford has called on U.S. officials to probe allegations of child rape against Joris Demmink, a top official in the Dutch Justice Ministry.  “U.S. officials need to ask some sharp questions,” writes Hannaford.  “The offices at the Departments of State and Justice that are concerned with child trafficking, as well as corresponding committees in Congress, need to look into this.  The Netherlands is a long-time ally, but the Dutch government needs to know that they can no longer turn a blind eye on this international children sex ring–apparently centered on it shores. This means the accusations against Demmink must be subjected to full public scrutiny.”

Hannaford cites Adele van der Plas, Dutch attorney for two boys, then 12 and 16 years old, who claim that in Turkey in the 1990s Demmink sexually assaulted them, among “numerous” other young victims:  “She says that one victim was 12 at the time he was brought by a police officer to Demmink’s chambers, where he was repeatedly sexually assaulted by Demmink.  Another boy was 14 at the time he was brought to Demmink and assaulted. 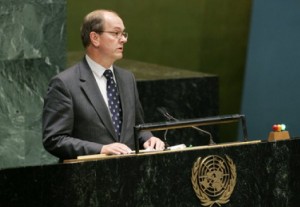 Joris Demmink should be asked some tough questions.

Recently, a third child victim, a Turkish boy, has come forward.  Van de Plas says, ‘It’s an outrage that Demmink has not been held to account for his crimes against children. Demmink’s perversion of Dutch justice to protect himself is an offense to any standard of basic decency. I hope our friends in other countries become aware of what’s happening and raise their voices in protest. We cannot allow Demmink’s offenses to be quietly hidden away. We must demand his public accountability in a court of law.'”

Recent news reports a major pedophilia ring with operations in the Netherlands – including the arrest of one Dutch citizen who stands accused of sexual assaults on 67 children.   The U.S. State Department’s 2011 report on trafficking in persons states that “the Netherlands is primarily a source, destination, and transit country for men, women, and children subjected to sex trafficking.”

In addition, as Hannaford details, Demmink’s Justice Ministry has opposed Dutch prosecutors’ efforts to ban “a pedophile group named ‘Martijn,’ which advocates consensual sex between adults and children. In a court hearing in the city of Assen, [the prosecutors] contended that ‘its banning and dissolution are necessary to avoid a dangerous situation for society.’ They said the group created ‘a sub-culture in which sexual relations between adults and children are tolerated and even glorified.'” But Demmink’s ministry claims that “the ‘Martijn’ group’s activities were not illegal under Dutch law. Its attorney claims protection under ‘freedom of expression.’ With the indulgence of the Ministry of Justice, it’s little wonder that pedophiles in the Netherlands seem to find it relatively easy to ‘express themselves,'” observes Hannaford.

“The allegations against Demmink raise serious issues, not only for the Netherlands, but for allied countries including the United States,” assets Hannaford.  “How much credibility can joint anti-child sex trafficking activities have if a key enforcement official may be implicated in such activities and, at the same time, is in a position to block inquiries of the allegations against him?  Why has he not been brought to court to face justice both as to his own behavior and his apparent ability to protect groups such as ‘Martijn’?”

Long-time senior advisor to President Ronald Reagan, Peter Hannaford is one of America’s top conservative commentators.  His latest book is Reagan’s Roots: The People and Places That Shaped His Character.