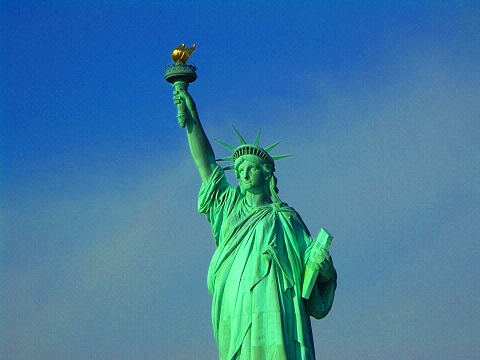 Today, the American symbol of freedom, the Statue of Liberty, was the backdrop for a world champion diver from a helicopter hovering 75 feet above the Hudson in order to welcome the Red Bull Cliff Diving World Series to the US this weekend. Colombian athlete Orlando Duque had one opportunity and three seconds to land a flying back tuck while traveling at speeds of 50 mph. The epic dive was to impress Lady Liberty one week before the world traveling sport makes its fifth and only US stop in Boston, Massachusetts this Sunday, August 25.

Traveling the world for the past five years as the pinnacle of cliff diving competitions, the Red Bull Cliff Diving World Series descends on picturesque, and sometimes rural locations– an ancient castle on the coast of Italy, a volcanic islet in Portugal or the translucent waters of Thailand. Boston began hosting the first-ever urban location three years ago for over 40,000 spectators and will once again invite the purest extreme sport athletes to dive from the rooftop of the Institute of Contemporary Art in South Boston’s harbor in 2013.

“It’s really exciting to get such a warm welcome back to the US,” said Red Bull Cliff Diver and ten time World Champion Orlando Duque. “It doesn’t get any better than diving in front of something as iconic as the Statue of Liberty. It’s beyond what I ever could have imagined.”

Making a splash in America’s most famous waters is important to all fourteen super lean cliff divers, who’s bodies take impacts of 2-3 G-forces each time they dive from 90 feet, which is at least 10-15 times a competition including training. The heat is on in Boston especially for the American competitors David Colturi from Michigan, Steven LoBue from South Florida, Kent De Mond from San Diego, Kyle Mitrione from Indiana and Andy Jones from Las Vegas. Former Olympian Greg Louganis will also be on-hand as a judge in Boston.

The 2013 Red Bull Cliff Diving World Series is once again the platform for breathtaking action and beyond-belief complexity, spotlighting the sport’s top athletes as well as young talent. In its fifth season, the World Series title is decided between May and October over the course of eight competitions across Europe, Asia, North and South America.

For more information on the Boston event or the rest of the series, please visit www.redbullcliffdiving.com.