By Candace Salima, a regular contributor to US Daily Review. 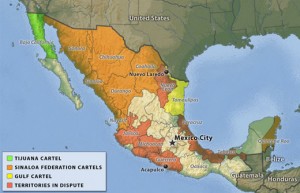 On September 17th I was privileged to interview the director of Border Narcotics Intelligence, a private agency working in concert with law enforcement in our southwestern states. They gather intelligence regarding the drug trade which they then turn over to the effected law enforcement agency. We discussed America’s 3rd War, the war between the Mexican drug cartels, the illegal immigrants, and America. We also talked about the effect this war is having on Americans in every city, county, and state. It was a clarifying interview sparking this article.

The war on our southern border is invading every aspect of American society. It is not just a war between the cartels and the Border Patrol. It doesn’t stay just between drug dealers and drug users. Illegal immigrants, if they aren’t forced into being drug mules or prostitutes, steal their way into America and 71% to 75% of them commit identity fraud. Middle Easterners and East Indians are quickly becoming the favorite of the coyotes. In other words, terrorists have an open entry into America where they will not be tracked. No visas. Nothing. They just purchase a false identity and disappear into American cities.

So how does this effect you and me? Let’s take it one step at a time.

Drug dealers and drug users have a special “relationship. The drug dealer, the predator, sells product to the drug user, the victim. The drug user will steal anything, from anyone, just to pay for their next hit. The Mexican drug cartels have clients in every corner of America and are dumping billions of dollars worth of drugs into America every year. The only way to reduce the amount of drugs pouring into America is to close the southern border

The Pew Hispanic Center adjusted its figures from 11.1 million illegal immigrants in America to 33.3 million. Both sides of the aisle admit that identity fraud numbers committed by illegal immigrants stand at 71 to 75%. So let’s do the math here. We’ll go with 72% as that seems to be the number most found in reports. 72% of 33.3 million is 23,976,000 Americans directly effected by the having their identity stolen. It often takes upwards of a decade to fully recover from the impact of having your identity stolen. College students can’t get loans or Pell grants. Try getting a mortgage when someone already has one in your name. A credit card? Not if someone has already ruined your credit. And the new favorite? Stealing the identities of children because it is often a decade or more before anyone notices. If we don’t seal the southern border, the numbers are going to climb until there isn’t a home or family in America untouched.

And last, for the sake of this article, but certainly not least, OTMs. “Other than Mexicans” coming over our southern border. Hiding your head in the sand does not change the fact that America is at war with a radical branch of Islam. Having a porous border, easily accessible to terrorists, is one of the most critical concerns anyone should have. Middle Easterners and East Indians pay a fortune to be sneaked into the United States, and the coyotes are only too willing to accommodate them. We have all seen how effected we can be by direct terrorist attacks on the America.

A major deterrent to all of these cancerous problems is to close our southern border. It isn’t the only step, but it is a huge step that will go a long way in mitigating these dangerous situations. And hey, Congress, since it is your job to “provide for the common defence” why don’t you get on that right away.