Which Way to the Nearest Hospital? 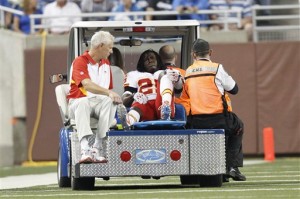 For many players, this weekend was more about visits to x-rays and MRI machines than it was about putting numbers on the board. Instead of being with their teammates on the field, they will be surrounded by graduates of x-ray technician schools. There were countless injuries, many mild but some were gravely serious. Jamaal Charles, one of the league’s best running backs of last season, was expected to have a season with some big numbers. The Chiefs’ star went down early with what turned out to be a torn ACL, spelling the end of his year. Things now look even grimmer for Kansas City moving forward. The Detroit Lions went on to humiliate the Chiefs with the final score finishing 48-3.

Michael Vick, the Philadelphia Eagles star quarterback suffered a concussion in a worrying clash with the helmet of one of his own players. He left the game and the Eagles went on to give up 14 points and the lead in the last quarter after Vick’s departure, subsequently losing to the Atlanta Falcons, 31-35. It seems that this creates a good deal of thought about how the Eagles might perform without Vick, who may miss a few weeks with his head injury. 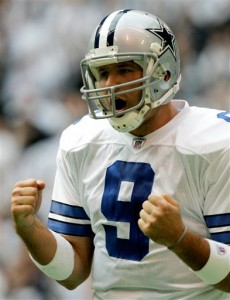 The Dallas Cowboys and under-fire quarterback Tony Romo came through in an exciting overtime win over the San Francisco 49ers. The victory for the team was huge, because starting the season at 0-2 would have been unacceptable for scrutinizing Dallas fans. Tony Romo was being charged with big hit after hit, and one in particular caused him to leave the game, holding his side. Romo came back into the fray late on, against medical suggestion, and turned the game around. After the game we found out that he returned with broken ribs and a punctured lung. Necessary heroics, it seems.

The Pittsburgh Steelers decided to flex their muscles this week (perhaps they read my column from last week) and destroyed the limping Seattle Seahawks 24-0. A shutout is an achievement in any sport, and doing it with absolute domination is awfully impressive. Look out for them to continue their fury.

Larry Fitzgerald, possibly the league’s best receiver, scored a touchdown and caught for 133-yards, but that wasn’t enough as his Cardinals fell to the Washington Redskins. Tim Hightower, Fitzgerald’s old teammate, had nearly 100 yards on the ground as Washington edged out Arizona with a late field goal to win the game by the slimmest of margins, 22-21. Washington plays Dallas next week in one of the sports’ greatest rivalries. Expect it to be a fierce one.

The Houston Texans improved to 2-0 after defeating the slippery looking Miami Dolphins, as the Matt Schaub-Andre Johnson connection looked just good enough. Time will tell how Houston will do against stronger opponents, but for now they stay atop the division.

The most entertaining game of the week took place in New York’s Orchard Park, where the Buffalo Bills defeated the Oakland Raiders in a ping-pong style of offensive game, with hard shots and strong passes being passed back and forth without time to take a breath. The Bills moved into a surprising group of teams at 2-0, much to the delight of their fans. 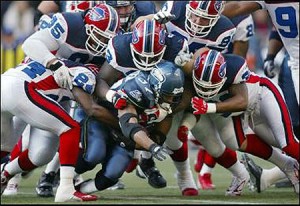 Tom Brady set more records this weekend as he became the first ever player to pass for over 400 yards the week after passing for more than 500 yards. He’s on track for some ridiculous season numbers, but realistically things will more than likely have occasion to slow down. The New England Patriots can throw their name into the hat of best teams in the NFL, and it would be hard to argue against their case.

Monday Night Football gave viewers a less than graceful affair, with two quarterbacks failing to dominate one another. Eli Manning’s New York Giants eventually came out on top against the St Louis Rams, but it really wasn’t an occasion worthy of Monday Night hype.