Donaldson, 36, shot a final round 66 to win by four strokes with an 18-under-par tally. 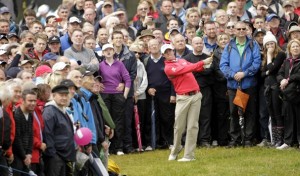