So where are people nodding off? Turns out, some very peculiar and dangerous places. 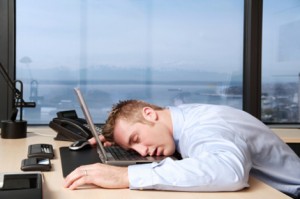 “We were stunned by some of the survey responses,” said Karin Mahoney, director of communications for the BSC. “One man fell asleep on a rooftop. Another man fell asleep while interviewing a job candidate. There was a teacher who fell asleep at the podium in front of her class. Clearly, people are sleeping just about everywhere except where they should be – in their own beds. And they’re likely not realizing the critical role the right mattress plays in achieving the quality of life that only good, healthful sleep can bring.”

But there’s hope. Seventy-seven percent of people surveyed say they’d give up something to get a better night’s sleep. Tops on the list were watching TV (31 percent), time spent on computers and social media (23 percent), exercise and going tochurch (both 16 percent).

“The health problems associated with not getting enough sleep are well documented,” said Mahoney. “People who don’t get enough sleep can suffer from poor performance at work or school to depression, diabetes, heart disease and other ailments.”

To promote a healthier lifestyle, the BSC – in conjunction with its annual “May Is Better Sleep Month” promotion – has launched Stop Sleeping Around, a campaign that encourages people to spend more time on their mattresses, so they don’t fall asleep in dangerous or embarrassing places. The campaign also serves to emphasize the importance of mattress quality and selection when looking to improve sleep and, in turn, overall health and well being.

The campaign kicks off on May 1st, with National Eight Hours in Bed Night, when the BSC is encouraging people to get a full night’s rest in their own. The BSC has set up a Facebook site and Twitter handle (@StopSleepinArnd, #stopsleepingaround)where people can go to share stories and videos of their most embarrassing moments “sleeping around,” as well as thoughts on how much better they feel when achieving a full night of healthful sleep.

“Our campaign is edged in humor, but our message is serious. People who consistently cheat themselves of a good night’s rest are risking their health,” said Mahoney. “By encouraging people to take a critical look at their sleep habits and their sleep environment, we’re hoping to play a role in improving their overall health and wellness.”