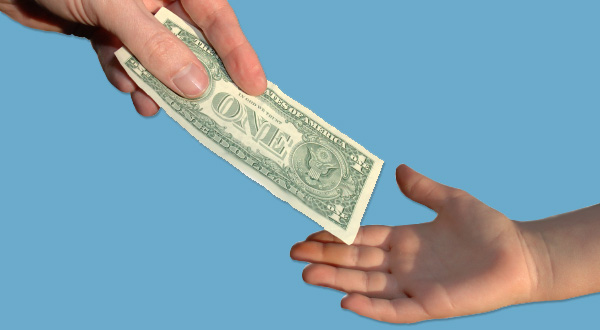 For many of us it was our first source of income, and the first time we experienced the agonizing choice between small bursts of instant gratification versus the long game for saving for something special. Half of Americans (50%) say they received an allowance when they were growing up, and among those with children ages four to 17, six in 10 (60%) say their children receive one. But what’s the going rate on an allowance these days? And who’s the most generous when it comes to deciding what’s an appropriate weekly payout?

These are some of the results of The Harris Poll® of 2,311 adults surveyed online between December 11 and 17, 2013 byHarris Interactive. (Full results, including data tables, can be found here)

Early childhood income gaps
When asked what they feel is an appropriate weekly allowance for children in three different age groups (4-9, 10-13 and 14-17), it is perhaps not surprising that appropriate allowance levels grow as children age (from $4.10 to $8.70 to $16.00, respectively), though it may surprise some to see that it in fact roughly doubles with each progression from one age category to the next. Moreover, there are some distinct shifts between how different groups of Americans perceive what constitutes an “appropriate” allowance:

Earn it!
Though Americans overall appear to see allowances as appropriate across age ranges, that’s not to say they think kids should be given money for nothing. While nine in ten (90%) believe an allowance is an important way for a child to learn about money, the same percentage (90%) feel that if a teenager wants to make money, he or she should get a job, and nearly as many (86%) say that children should only get an allowance when they work for it (doing household chores, for example).

Additionally, nearly three-fourths each believe that bad behavior should be taken out of a child’s allowance in some way (74%) and that children shouldn’t expect to get paid just for helping around the house (73%).