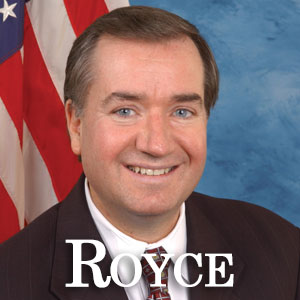 This transpired while many embassies were closed due to a new terror threat.

More than a decade has passed since the last State Department authorization was enacted into law in 2003.

[A summary of today’s Committee action, including adopted amendments, is available HERE.]

Chairman Royce, who introduced the bill earlier this week, said:  “This legislation provides our diplomats with the tools they need to do their job effectively, and as safely as possible.  I appreciate the collaboration I have had with Ranking Member Engel on this bipartisan bill, important especially in this time of growing threats abroad.  Authorizing these programs will increase the Committee’s oversight ability; it will also improve Committee members’ ability to legislate new programs, saving money, and reforming old ones.   While this bill is fiscally responsible –representing a nearly nine percent overall cut in spending from last year– it fully funds the Administration’s embassy security request.  It also contains important embassy security reforms, in response to the Benghazi attack.  These include requiring that high risk posts be designated, enhanced planning for rapid deployment of military resources in response to a crisis, and funding for more Marine guards at embassy sites.  Very important, the bill contains a provision that will award local security guard contracts on the basis of “best value,” rather than lowest cost.   For our highest-threat posts, we need the highest quality security personnel.  I am very hopeful we that we’ll be able to send it to the Senate and reach agreement to authorize State Department operations, as it should be.”

The bill text and a section-by-section summary for H.R. 2848 (as introduced) are availableHERE.

The Committee will also passed H.R. 419, the Taiwan Policy Act of 2013, which expresses support for Taiwan and strengthens the U.S.-Taiwan relationship politically, economically and through security assistance.