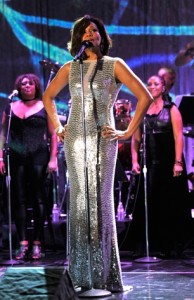 Paramedics arriving at the Beverly Hilton found the singer’s body.

While the cause of death is still unknown, Houston’s publicist Kristen Foster has confirmed the sad news.

Houston had been scheduled to attend the annual pre-Grammy party of music mogul Clive Davis, who discovered her, tonight and had attended rehearsals for the event earlier this week. CNN reports the party is still going on.

CNN also reports that the Grammy awards ceremony Sunday will include tributes to the singer, including one possible one by Jennifer Hudson. The Recording Academy released the following statement on Saturday evening:

Six-time GRAMMY(r) winner Whitney Houston was one of the world’s greatest pop singers of all time who leaves behind a robust musical soundtrack spanning the past three decades. Her powerful voice graced many memorable and award-winning songs. A light has been dimmed in our music community today, and we extend our deepest condolences to her family, friends, fans and all who have been touched by her beautiful voice.

Houston, the daughter of gospel singer Cissy Houston and cousin of singer Dionne Warwick, was known for her string of hits in the