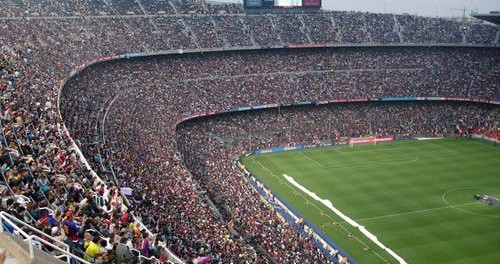 The 2018-19 Premier League is already a third of the way through and we’ve already seen some twists and turns and some exciting football being played. Even being a third of the way through the league, it’s still hard to put a thumb on an outright winner, even if Manchester City are performing to a much higher standard than everybody else. Let’s take a look at the main candidates who have a chance of taking the Premier League title from their opponents this season.

Manchester City are probably the best footballing team in Europe at the moment, and maybe even the world. They still have a lot to do to compete with the likes of Barcelona and Real Madrid on the European stage, but teams in England certainly have a lot of catching up to do to get anywhere near the level of Manchester City. City currently lead the pack in the English Premier League and, if they can keep up their good form between now and January, they will find themselves at the top going into next year, which has always played to their advantage. The Christmas period is where the real test comes, with many games being played each week. However, City have a lot of strength and depth to their squad already, which is only going to play into their hands. Should they still come out on top when January comes along, they are going to have the strongest chance of walking away with the title. If you fancy Manchester City to take the title this season, have a look at the sports betting section on the Stakers website to see what sort of odds you can get.

Liverpool look like the attacking force they once were back in the 1980s. One advantage they have over the other teams (apart from Manchester City) is that they have a good defence, too. The form of Manchester City this season would be a slight worry for Liverpool fans, but they all know they have a chance of competing for the title this season thanks to the squad of players they have. The only thing you could question of Liverpool is whether they have the bottle to keep playing the way they are.

If Daniel Levy were to stop being stubborn as Spurs chairman, they could well spend a bit of money in the January transfer window which will only strengthen the squad as a whole. Tottenham look a bit of hit and miss in the league this season, but they do still find themselves competing for the title as soon as this season ends. They need to do a lot more against the bigger teams in the Premier League after they confirmed they are a dominating side even against Chelsea, but they don’t seem to be consistent in that department. If they can go up against the big guns and prove their critics wrong, they could win the league next season, but it’s looking more than likely that they will have to wait until then.

Chelsea started off very well this season but losing 3-1 to Spurs a couple of weeks back has made the fans nervous. Chelsea find themselves in 4th spot behind Spurs, Liverpool and Manchester City, so they do have their work cut out if they are going to compete for the title this season. With that being said, Chelsea are experienced Premier League winners and, if they can get a good run of form together between now and the Christmas period, they could well sneak up on the favourites. They would need Manchester City to drop unlikely points, but we’ve seen it happen before. Will Chelsea get to grips this season or will they end up dropping out of the top 4 completely?

While it would seem unlikely for Arsenal to win the Premier League for the first time since 2004, they are still in with a chance this season should they carry on winning games. Emery has changed Arsenal a lot since he took over in the summer, but he still feels he can get a lot more out of his current squad. Even still, an addition or two in the January transfer window wouldn’t go amiss should the Arsenal owners want to strengthen sooner rather than later. Arsenal could certainly do with another attacking player to give them a bit more depth going into the new year.

The only remaining candidate that could possibly take the title this year is Manchester United, albeit a very slim chance (if any at all). They already trail league leaders Manchester City by 15 points, and that is a margin that looks almost impossible even for the Red Devils to make up. It’s still early in the season, though, and if they can pick up some important points over the next few months and get one over all their rivals, there is still a glimmer of hope. Jose Mourinho still doesn’t look like he has found the right formula at Old Trafford, and it’s not quite the scary place for opponents that it once was going back ten years ago. If, however, the players start to gel and Jose can pick the right squad, they could instantly click and surprise a lot of football fans. Either way, it’s looking more and more likely that United will end up going for the top 4 year this year, and then build on that next year. He will also set the objective of trying to get as far as possible in the Champions League now they have qualified for the next round.

The above teams look the most likely to compete for the title this season. However, you can’t count the likes of Manchester United or Everton out of the equation just yet, even if they are trailing their rivals Manchester City by a massive 15 points already. Of course, United will need a miracle to happen before the end of the season comes to a close, but having the special one in the dugout could give them the confidence to go on a good run.