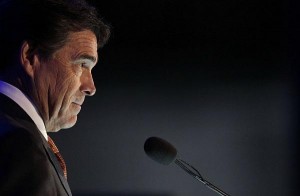 If you pick up any newspaper or news magazine, watch TV or visit a political website, you will typically find one common theme.  Governor Rick Perry is in trouble.  In a shocking move, Herman Cain is pulling the race card on the governor because of the name of his hunting camp.  Some argue it is well deserved in light of what Perry has called it. Candidate Michele Bachmann (R-MN) calls the governor’s botched HIV vaccine program “PerryCare” and draws its own unique, but disturbing, parallels with “ObamaCare.”  Perry has also supported giving “in state” tuition rates for illegal immigrants, drawing fire from supporters among his core constituency.  Then there was his effort to avoid an income tax a few years back by supporting a “Margin Tax,” that many economists argue was the biggest tax increase in the state’s history. This tax — on the overhead of doing business — is essentially “taxation without representation” of money actually made.  There is more, in fact, when it comes to Perry there is a laundry list of criticism.  In an article that I wrote about him several weeks ago I noted that I was arguing with myself about whether he should be taken seriously.

At this point, there is no choice but to take him seriously. Very serious, in fact. The so-called mainstream media clearly cannot stand Perry and they have made it clear they do not want him to win. In fact, in spite of the worst economy since the Great Depression, the press seems to be completely supportive of a second term for Barack Obama. Therefore, the GOP candidate they will eventually gravitate towards, we be the one least capable of beating Obama.

It is true, the press will run stories on Perry because they “sale” newspapers, draw audience, and all those other functions that keeps media “competitive.” But the level of criticism and the extent of it has more to do with the fear in the media towards anyone capable of taking out Obama. Rick Perry remains the most likely person able to do that, in my opinion, for several reasons:

I know, everyone you talk to says the Texas governor is in trouble. Particularly those in the media. I will begin to believe it is true when the media ignores him or even helps him to get the nomination, because, in the end, they clearly want Obama to be reelected.