The American Public Transportation Association (APTA) and Building America’s Future (BAF) today released a study predicting that record numbers of Americans will turn to public transportation as a cost-cutting measure in the face of volatile gas prices. To meet this impending surge in demand, APTA and BAF are calling on Congress to pass a multi-year, fully funded surface transportation bill as the Senate and House begin Conference Committee negotiations. 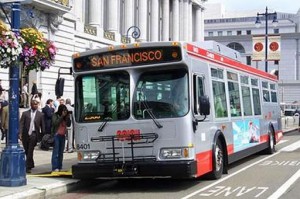 The analysis used historical trends and independent research data to make predictions on the impact gas prices would have on public transit ridership across the nation. It showed that on average, nationwide public transportation systems will add nearly 200 million new trips this year even as gas prices fluctuate by as much as 50 cents per gallon.

For example, as gas prices approached an average of $4 a gallon nationally this year, the analysis predicted an additional 290 million passenger trips could be expected on average for the year, resulting in more than 10.7 billion trips per year. Even as gas prices drop to $3.75, the analysis predicted there would still be an additional 240 million passenger trips because of the volatile up and down nature of fuel prices.  These behaviors show that Americans are looking for a long-term, sustainable alternative to driving.

“Whether it is by bus or train, millions of Americans rely on public transportation every day and mobility in our nation’s most populated areas depends on effective transportation options,” said Ed Rendell, former governor of Pennsylvania and co-chair of BAF. “Without reliable transit systems, congestion in our metro areas will rise to unacceptable levels. With more people expected to ride already overburdened transit systems, it is imperative that Congress act and pass a well-funded, multi-year transportation bill as soon as possible.”

“The volatility of gas prices continue to highlight the vital need for our nation’s leaders to provide long-term solutions to the increasing demand for public transportation,” said APTA President Michael Melaniphy. “Nearly all experts agree that the swings in gas prices will continue for the foreseeable future. As millions of Americans are expected to turn to public transportation for a way to save money, we must address the ongoing capacity issues faced by many systems around the country. Congress must provide stable investments to allow public transit systems of all sizes from coast to coast to meet demand.”

“This study emphasizes that the elasticity of gas prices proves that Americans across this country view public transportation as an integral part of the transportation network,” said Gary Thomas, president/executive director of Dallas Area Rapid Transit and chairman of the APTA.  “Since the public views our commuting network as one cohesive system, we should fund and build it as one system where both public transportation and our road network complement each other.”

“Congress must pass surface transportation reauthorization that recognizes the added demand the systems are facing,” said Paul Jablonski, chief executive officer of San Diego Metro Transit System and chair of the California Transit Association.  “Our system achieved record ridership growth while providing vital transportation solutions to the citizens of San Diego.  Our political leaders must look to continue to support its expansion.”

“We know these up and down spikes in gas prices will bring more riders,” said Curtis Stitt, president and CEO of the Central Ohio Transit Authority. “We must invest now or our system will not be able to accommodate this influx of new public transit riders looking for alternatives to driving.”