M-F at 7 am CST on Business Talk 1110, hosted by US Daily Review Publisher/Editor in Chief, Kevin Price.
Kevin Price interviewed Lisa Curtis, a foreign policy analyst for the Heritage Foundation, one of the nation’s leading conservative think tanks.  The topic, the problems of Afghanistan and the future of US foreign policy there. One of the issues came up was the possible early withdraw of the US in order for Obama to accommodate his most liberal base.
Here is that interview in its entirety.
According to Heritage:

Lisa Curtis analyzes America’s economic, security and political relationships with India, Pakistan, Afghanistan and other nations of South Asia as a senior research fellow at The Heritage Foundation. 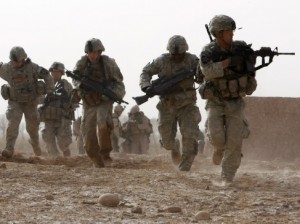 Lawmakers and journalists alike turn to Curtis for her clear-eyed research and perspective on U.S. interests in some of the most desperate, dangerous and fast-developing parts of the world.

Working out of Heritage’s Asian Studies Center, she became a reliable source for many Americans while analyzing breaking news in Pakistan and Afghanistan as a guest expert on CNN, Fox News, MSNBC, CBS, CNBC, PBS and BBC, among other outlets.

Curtis has testified before Congress on more than a dozen occasions in recent years on topics related to India, Pakistan, radical Islamists and America’s image abroad.

She co-chaired the independent Pakistan Policy Working Group, which in September 2008 published a report, The U.S. and Pakistan: The Next Chapter, which laid out recommendations on how the new administration should engage an unsteady Pakistan.

Curtis has been quoted or cited by dozens of news publications. Her commentary has appeared in TheWashington Times, National Review Online, FoxNews.com and National Public Radio Online, as well in such South Asian publications as The Mint, an Indian daily, and The News, a Pakistani daily.

Before joining Heritage in August 2006, Curtis was a member of the professional staff of the Senate Foreign Relations Committee for three years. She was in charge of South Asia issues for the chairman at the time, Sen. Richard Lugar (R-Ind.).

From 2001 to 2003, Curtis was the White House-appointed senior adviser to the assistant secretary of state for South Asian affairs, tracking India-Pakistan relations. She worked as an analyst for the Central Intelligence Agency in the late 1990s.

Curtis also served abroad in the Foreign Service in the mid-1990s, when she was assigned to the U.S. embassies in Pakistan and India. She has been part of official missions to the region, including a Commerce Department-led delegation to initiate the U.S.-India High Technology Working Group in November 2002 and the U.S. delegation to the International Donors Conference in Pakistan to raise funds for earthquake victims in November 2005.

In 1996, Curtis received the State Department’s Meritorious Honor Award for her role as embassy point person in a yearlong, four-nation endeavor to free hostages held by militants in Kashmir.

A native of Fort Wayne, Ind., Curtis received a bachelor’s degree in economics at Indiana University in 1990. She resides in Herndon, Va., with her husband and two children.