By Avon, Special for  USDR

Avon launched more female bosses than any other company in the past century, now New Avon LLC (“Avon”) has commissioned a survey for National Boss’s Day (October 17), which found that most Americans (80 percent) would love to be their own boss. The research was conducted in conjunction with Avon’s recently unveiled advertising campaign, “This is Boss Life.” The new campaign highlights the flexibility and financial opportunity of becoming an Avon Representative, and encourages women to take a step beyond their typical 9-to-5 work life and say hello to a new kind of life where they are the  boss.

“Avon is a 130 year old iconic American brand with a history of empowering women. The ‘This is Boss Life’ campaign highlights Avon as the company that enables women to start and run a business on her own terms,” said Scott White, Chief Executive Officer, New Avon. “We provide the support, training and tools our Representatives need to build successful businesses- providing a path to financial opportunity and independence.” 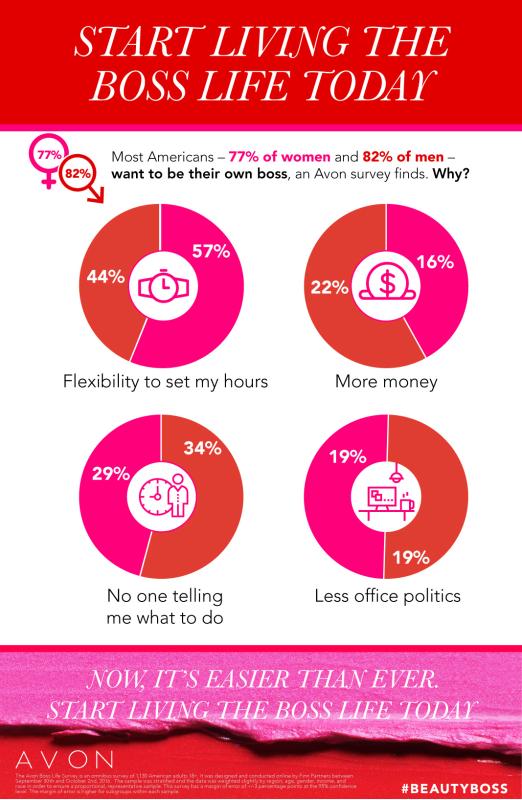 Today, on National Boss’s Day, Avon is taking the opportunity to invite women – and men – everywhere to take control of their lives and start living the Avon Boss Life. The “This is Boss Life” print campaign features the real-life success stories of Avon Representatives Georgiana Haynes, Lydia Osolinsky and Carlos and Milagros Garcia. Lydia explains what being her own boss means to her, “For me, being my own boss is about the ownership in success – and that’s empowering. I have the control to make changes to get what I need — there’s always another way to make things happen. I love that Avon is a part of that.” To learn more about their stories, visit the Avon Beauty for a Purpose Blog  here.

The television commercial features the campaign heroine bored by her job – until she discovers a brand new life as an Avon Representative. The music video-style commercial is set to the energetic, well-known female anthem, “I Will Survive.” The re-imagined lyrics include such affirmative statements as “I should have done this years ago/I should have broken free/If I’d known for just one second I could be the boss of me” and “Oh as long as I’ve got Avon and the newest shade of gloss/I’ve got passion, can’t you see?/‘Cause my future’s up to me/Yeah, I’m a  Boss.”

To celebrate National Boss’s Day, Avon has uploaded the re-imagined “I Will Survive” campaign song on video messaging app Dubsmash to let users record and share a video of themselves lipsyncing the song. All are also invited to share a photo of what your Boss Life looks like using Avon’s #BeautyBoss photo frame on any of your social media  channels.

Methodology –Avon Boss Life  Survey
The Avon Boss Life Survey is an omnibus survey of 1,130 American adults 18+. It was designed and conducted online by Finn Partners between September 30th and October 2nd, 2016. The sample was stratified and the data was weighted slightly by region, age, gender, income, and race in order to ensure a proportional, representative sample. This survey has a margin of error of +/-3 percentage points at the 95% confidence level. The margin of error is higher for subgroups within each  sample.

About New Avon  LLC
New Avon LLC (“Avon”) is the leading social selling beauty company in North America. The company generated over $1 billion in revenues during 2015, and has nearly 400,000 independent sales Representatives in the United States, Puerto Rico and Canada. Avon’s product portfolio includes award-winning skincare, color cosmetics, fragrance and personal care products, featuring iconic brands such as Anew, Avon Color, mark., and Skin So Soft, as well as fashion and accessories. Avon has a 130 year history of empowering women through economic opportunity, and the company also proudly supports the Avon Foundation for Women in its efforts to end breast cancer and domestic violence. Learn more about New Avon and its products at  www.avon.com.

Avon Representative Georgiana Haynes explains why she is a #BeautyBoss 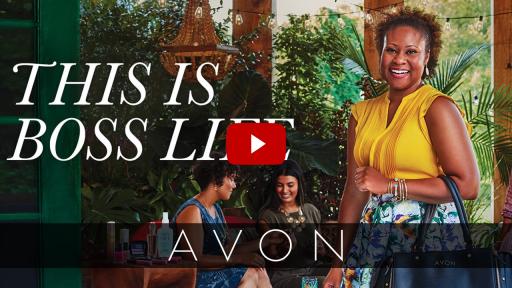 Avon Representative Lydia Osolinsky explains why she is a #BeautyBoss 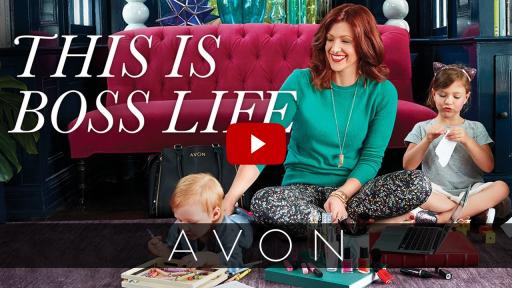 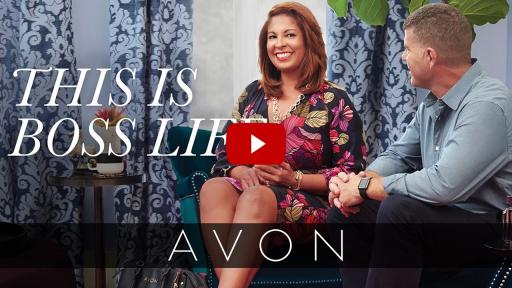