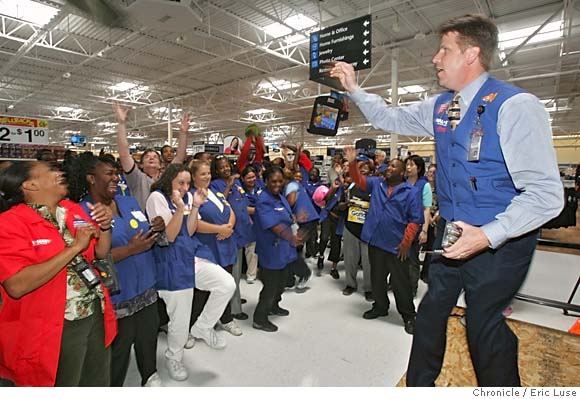 This past week I had the opportunity to appear on a television talk show. After being introduced as the author of: Wal-Mart’s EGOnomics – Always – The Greed Behind the Smiley Face, the very first question I was asked, was “what is the best way to get your products into the Wal-Mart stores.” My immediate response was, “Tell them you are from China.”

Needless to say, this was not the answer the hostess expected, and it was a few moments before I was asked a second question. This time it was, “Why do you say that?”  My response to this question was as follows:

I strongly believe that three different entities are responsible for today’s American economy.  They are: (1) the ineptitude and greed of our government; (2) the financial aid we borrow from our “big brother” China; and (3) Wal-Mart’s passion for supporting China’s ‘slave-labor’ manufacturing industry.”

If my answer surprised you, you’re not alone. Yes, many Americans blame our government. It’s because the actions of our government are the most obvious. We read about their ineptitude on a near-daily basis. Their philosophy seems to be, let’s spend and spend, and spend more – we can always borrow more money from China. And they do, continuing to toss stimulus monies and tax credits at any and all “pals” and “shovel jobs” – with seemingly no forethought ever given.

Production drives our economy, and the combination of China (and its pennies-per-hour labor) and Wal-Mart (the world’s largest retailer) has virtually eliminated America’s manufacturing and retailing industries. Today, Wal-Mart’s annual sales exceed $450 billion. And, of the products they sell, 92% are NOT “Made in America.” They are imported from China or elsewhere.

Wal-Mart demonstrates – on a near-daily basis – that they could care less about what is best for America. Their only concern is to continue to follow their greed-driven business plan: “Buy at the lowest possible price and sell at the highest possible price.” In doing so, Wal-Mart has forced our manufacturers to either import their products from these lands of cheap labor, or open their facilities in these same lands. And, even after succumbing to Wal-Mart’s demands, far too many are forced out of business due to Wal-Mart’s continuing and constant demands for lower prices.

Before Sam Walton, no American ever conceived a business plan quite like his. Or, if they conceived it, they didn’t have the guts to execute it. It was and continues to be quite easy to execute. Simply put, the strategy behind Walton’s plan was and is to destroy the competition with the cheap prices Wal-Mart enjoys from buying its goods from “cheap” foreign sources.

Wal-Mart’s overriding greed has also forced even towns and innumerable retailers to close. In doing so, our country’s retailing goliath has further lengthened America’s unemployment lines. But, the unemployed continue to shop at Wal-Mart, demonstrating full faith in the constant outward facades of the feel-good smiley face and their powerful banner that touts “everyday low prices – Always.”  By doing so, they unwittingly contribute to Wal-Mart’s success. And, this is a real tragedy.

America’s decline all started when Wal-Mart first began purchasing their goods from China’s sweatshops. It was Wal-Mart’s rapid expansion and these purchases that led to the decline of America and its economy. By doing so, they also bolstered China’s economy, while putting American companies out of business, and American workers out of work. Predictably, this combination forced America’s economy to decline.

Today China manufacturers the majority of the products America’s consumers purchase and China loans our government the monies necessary to sustain our economy. So, just how do we make effectual changes?

Realistically there is nothing that can be done about China, other than to pay back our indebtedness – and do so as swiftly as possible. As for our government, it would take too long to vote them all out of office, and the new officials seemingly catch the same “greed” disease almost instantaneously.

But we can do something about the Wal-Mart problem. We could boycott their stores. However, there is a more honorable solution. Let’s not play on their level. Instead let’s tell Congress to incentivize Wal-Mart – using their tax credits and stimulus monies – to reduce its number of imports. This appears to be the most immediate solution. By doing so, America’s retailing and manufacturing industries could be revitalized, not overnight, but in the relatively near future. And, who knows but that our government and Wal-Mart could return to the status of “heroes.”

If this tactic doesn’t work, a boycott should. But let’s be more honorable than Wal-Mart is.

My company was a victim of Wal-Mart’s greed. They employed outright lies to poison our company and our products within our industry. Thereafter they demanded that we split our income 80% (Wal-Mart’s share) – 20% (our share), forcing us to close our doors and release our more than 100 employees. Wal-Mart even threatened suits for defamation against each member of our management team. They take no prisoners.