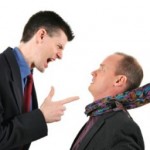 Forget about realism for a moment and pretend that your boss suddenly comes charging down the hallway toward you, with her fist raised. Just as she begins to reach striking distance, what would you instinctively do? Chances are excellent that even if you’ve never been in a fistfight in your life, you’d raise your arm to deflect the blow. What you wouldn’t do is keep your arms at your sides, wait to be struck, and then conclude, “Gee, I must need to work harder.”

Ironically, that’s how targets of workplace bullying react everyday when the attack is verbal. Prepare yourself for deflecting verbal attacks by learning to recognize workplace bullying. Legitimate criticism is always about job performance and never about extraneous issues such as your height, weight, or receding hairline.  When your boss criticizes you for reasons that have nothing to do with the way you perform your job, it’s bullying, pure and simple.

2: Nipping the Bullying in the Bud

The above example of a boss suddenly becoming violent is ludicrous precisely because bullying never starts that way. All bullies, whether they’re in the schoolyard, the prison yard or the workplace, first test the waters by saying or doing something offensive, and then carefully gauging your reaction. Responding with hesitancy or reacting emotionally lets a bully know you’d make an ideal target.

Likewise, displaying cool confidence in the face of bullying makes you look like a highly unsavory target. For example, if you were presenting an idea in a group meeting and your boss kept interrupting you, you could put your hand out in front of you as though you were stopping traffic, look your boss in the eye, and casually say, “Excuse me. I wasn’t finished. How about this: you grant me the courtesy of letting me finish and I promise to listen respectfully you when you’re talking?” Then immediately break eye contact and smoothly continue speaking where you left off.

Face to face communication entails both verbal and body language simultaneously, but body language speaks the loudest. Going back to the example of being interrupted during a business meeting, if you used my exact words but looked down at your hands, with your shoulders slumped, and spoke in a whiny tone of voice, what message would you be communicating? Even if you don’t feel self confident, fake feeling it until you do.

If the bullying has been going on for some time, the bad news is that it’s too late to nip it in the bud. The good news is that almost every boss is susceptible to flattery if it’s done right. A subtle and powerful way of flattering your boss is to ask for advice. For instance, tell your boss you sense you’re not meeting his expectations and ask for three specific examples of where you need to improve. Then move heaven and earth to improve in those areas. After a week or so, ask your boss how you’re doing. Even if the feedback isn’t encouraging, keep asking for ways to improve and then acting on them.

There’s an excellent chance that your boss will admire your dedication and eagerly take credit for turning around a ‘problem’ employee.  (I can virtually promise you that if you’ve been getting bullied at work, your boss has already laid the groundwork for undermining your credibility with higher management.) After you’ve demonstrated your willingness to adopt your boss’s suggestions, what you’ve effectively done is granted your boss bragging rights. Most managers can only climb so far up the organizational ladder solely on their technical skills. Managers who demonstrate good ‘people managing’ skills are far more likely to find themselves highly valued by the organization.

It is a natural and normal human reaction to want justice; to see the bully boss punished and your dignity restored by reporting the bully to upper management or by bringing a lawsuit against your employer. But you’re kidding yourself if you think the deck isn’t greatly stacked against targets.

When workplace bullying gets reported, 62% of the time the organization does nothing or actually rewards the bully (Workplace Bullying Institute, 2010). When targets try suing the organization they soon learn that there are no laws in the US against bullying in the workplace. In the very rare instances when targets have won monetary judgments after protracted litigation (corporations have very deep pockets), the toll on the target’s career, and family, has been horrendous.

82% of targets eventually leave their jobs, and not all of them voluntarily (Workplace Bullying Institute, 2010). Targets shouldn’t be the ones who get ‘punished’ by having to change jobs, often for a lower salary.  But since bullying in the workplace is perfectly legal, it can be wiser to cut your losses.  Being in a stressful job environment takes a serious toll on your health, particularly with respect to blood pressure.  Hypertension is called The Silent Killer precisely because it’s entirely possible to be totally unaware of having it until you’re brought to an emergency room and someone tells you you’ve had a stroke.

The best defense against a bully boss is a good offense.  Confronting the boss’s behavior the first time it happens with clarity and confident body language is key.  Failing that, using psychology to flatter your boss can be a powerful alternative. Unless and until new laws are created to protect employees against workplace bullying, your best bet may ultimately be to resign and make a fresh start elsewhere.