Tesla Motors delivered Model S, the world’s first “premium” electric sedan, to its first customers at an invitation-only event at the Tesla Factory in Fremont, California today. These deliveries put Model S on the road approximately one month earlier than previously announced and places the company in a good position to build 5,000 cars by the end of 2012, followed by 20,000 cars in 2013.

“In 2009, we set out to build the most innovative car of the 21st century, and since then have dedicated ourselves to developing and testing Model S to ensure that under any situation, Model S never disappoints,” said Elon Musk, Tesla Motors co-founder, CEO and Chief Product Architect. “Today we achieved our goal with an exceptional car that we believe sets a new standard for efficiency, safety, style, technology, operating cost and performance.” 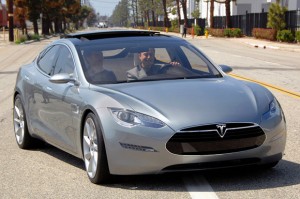 Model S is the world’s first premium sedan to be built from the ground up as an electric vehicle, meticulously engineered to elevate the public’s expectations of what a premium sedan can be. The five-door premium sedan competes with the top cars in its class in spaciousness, handling and style, yet produces zero emissions. Because there is no internal combustion engine or transmission tunnel, the interior of the car allows for additional cargo space in the front of the vehicle and one of the most spacious cabins in its class.

The heart of Model S is its efficiently-packaged electric powertrain that delivers a thrilling driving experience while setting a new EPA record for electric vehicle range of 265 miles. Model S comes with three battery options – 40 kWh, 60 kWh and 85 kWh. The battery’s floor-mounted position gives Model S a low center of gravity and ideal weight distribution for exhilarating performance and superior handling. Model S has many similar features, including immediate responsiveness, instant torque and smooth acceleration that made the Tesla Roadster famous. Tesla has already received more than 10,000 reservations worldwide for Model S.

Deliveries of Model S in Europe and Asia will begin in early and mid-2013, respectively.

Tesla’s Retail Strategy
Tesla is reinventing the car-buying experience with its unique retail model. Tesla stores feature a hands-on exhibit of the Model S drivetrain, a Design Studio where customers can customize their own Model S, and an interactive touchscreen experience designed to engage and inform customers about Tesla’s advanced technology and the benefits of driving electric.

When it comes to delivery, all customers have the option to upgrade to a “Tesla Personal Delivery.” With this option, Tesla will deliver their car wherever a customer chooses: at home, at work, at a friend’s house, at a hotel while on vacation, or anywhere else that brings a smile. During Tesla Personal Delivery, a Product Specialist will walk through many of the features that make Model S great and will explain important details customers need to know about owning Model S. Customers may choose to take delivery of their vehicle at Tesla’s Fremont factory where they may also receive a tour to see where their vehicle was born.

Customer Test Drives
Tesla recently announced its Get Amped Model S Tour, and during the next 45 days, intends to provide more than 5,000 test drives to Model S Reservation Holders and friends. The tour begins in Fremont, California on June 23rd and 24th, then moves to Los Angeles the following weekend. The test drive tour will travel to other select North American cities in July and August.

A video recording of today’s event can be found here.