July 11th is “World Population Day,” which means we should all be ready to be deluged with scary headlines.

John McCormick of the Chicago Tribune has an article with the following headlines:

NET RESULT: THE NATION GROWS BY 1 EVERY 11 SECONDS” 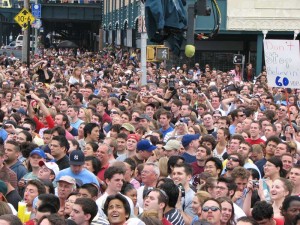 That sounds a little scary and from all the science fiction movies we saw and books we read in school (one of my favorite was Soylent Green; which, in case you didn’t know “IS PEOPLE”) and from the philosophers we read in college (such as Thomas Robert Malthus who argued that large populations mean nothing but starvation and deprivation), our concerns seem most valid.

However, the topic deserves a second look.

The reality is, countries are not poor because of how many people they have. They are poor because of economic policies. One of my favorite examples is Singapore, which is the second most densely populated independent country in the world. In spite of the fact that Singapore has almost twice as many people per square mile as the much poorer Mexico, it is one of the most affluent countries in the world and has the highest standard of living in Asia, and is ranked 11th in the world. Instead of encouraging population control, it has education programs and tax incentives that encourages large families. It has virtually no natural resources of its own, but the people enjoy high incomes and unemployment of less than 3 percent. This is, of course, one of the lowest unemployment levels in the world (the US, which has around 10 percent of the population per square mile as Singapore, is at 5 percent). Singapore’s success didn’t happen by accident, but by policies that support economic freedom, wealth creation, and by avoiding taxation on wealth creation that weakens economic growth.

We learn from Singapore, one of the most “over populated” countries in the world, that large numbers of people don’t hurt economies. Government policies do. China and India’s economic renaissance is proving that every day as they change their policies and move towards free markets.

If “more people” is “bad”, why does virtually every city in the country encourage people to move to them and as towns lose numbers it is a sign of decline? The common sense behind the need for more people in cities works the same for countries, as long as the policies of the government work.

The US may not be getting over crowded, and there is plenty of room for more. As long as government policies are “good,” we won’t have to treat people as “bad.” That’s the American way.