By Eric Papp, Special for USDR. 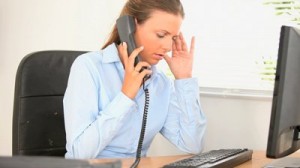 “Have your feelings been hurt today at work? Has somebody caused you distress? If so, call the law offices of 1-800-Joe No Responsibility.” Sound familiar?

This type of mentality permeates our culture, as seen in government, business and some reality TV shows. Initially, one of my favorite shows was “The Apprentice,” a program about Donald Trump and contestants competing for the role of his next apprentice. The show grew tiring, though, because the attention was mostly centered on boardroom drama and who could best defend themselves to avoid being fired instead of who stood out on the merits of their abilities.

As the show advanced, “You’re fired!” seemed to center around defending a lack of accountability. Regardless of who made a mistake, often the project manager couldn’t directly say that he made a mistake. Instead, that person pinpointed someone else’s performance for fear of being fired himself.

That’s the wrong lesson to teach people, because it projects to them that they can avert their responsibility by blaming others, and whoever is better at pointing the blame is the winner. This hardly seems fair or equitable.

Unfortunately, in today’s society we seem to hold people increasingly less accountable for their actions, and we are paying the price. When you breed and teach a culture of no accountability, it’s very hard to reach anything above mediocrity.

“Responsibility is the price of greatness.” Winston Churchill

Recently I talked to a friend who looked distressed. When I asked what was wrong, he said that lately he had been dealing with a lot of stress at work with Mark, a man in his department who had more seniority at the company.

Every time my friend tried to hold Mark accountable, like asking for something that was due or following up on a project, Mark would go over his head and complain to someone, saying that my friend was treating him unfairly. Then my friend would find himself in trouble with his boss, as well as having to pick up Mark’s slack.

This example indicates that good employees get punished, like my friend who is devoted, hardworking and demonstrating a dedicated work ethic. He gets admonished by HR while Mark goes unscathed, because Mark has been there longer and the company doesn’t hold people accountable.

Unfortunately, this story is too typical in many organizations, where good employees are punished by getting more work and more responsibility, while bad employees are rewarded with more time to do a job and less responsibility. Management officials simply don’t put a project on the plate of an underachieving employee because they know it won’t get done on time. And at the end of the day, it needs to get done.

If this mindset exists in your organization, it needs to stop. The idea that someone can’t be fired, that they are protected because they are part of a union and it will take an act of Congress to fire them, is a breeding ground for below-average performance. Until we hold people responsible for their actions and accountable in our organizations, this type of behavior will continue.

“People think responsibility is hard to bear. It’s not. I think that sometimes it is the absence of responsibility that is harder to bear. You have a great feeling of impotence.” Henry Kissinger

I’m often amazed when I hear teachers talk about tenure, whether at the college or high school level. It’s a very disturbing concept because tenure means a lack of accountability, or very loose efforts in terms of accountability.

People get upset when their comfort zone is threatened and they worry about being fired. If we want our school systems to improve, we must start with our leaders in the classroom. How can teachers hold their students accountable if they are not willing to hold themselves to higher standards?

Tenure can breed weak leadership, poor results, low standards, lack of accountability and an environment where good gets punished and bad gets rewarded.

Most teachers are amazing people, and many influential people in my life were either teachers or coaches. They get paid very little and put up with so much. Both of my parents were in education.

A teacher for 33 years, my mom taught in a private Catholic school, where each year she was evaluated on performance, not experience. If she did well, she kept her job and her annual contract was renewed. By holding teachers to a higher standard, where responsible teachers held their students accountable, the school was one of the best with a waiting list to get in.

We need to wake up and provide better leadership in our schools and communities, but it starts with holding ourselves and our teachers accountable by losing the idea of tenure.

I worked as an independent contractor for a seminar company, where I conducted management training and all-day public seminars were open to the general public. Some people were sent and didn’t want to be there, much like a student with a bad attitude. At the end of each seminar, I was evaluated by every person who attended.

It was a tough time at first, but I’m so thankful for the feedback I got. Over time, I put in the effort and improved. When I left the seminar company, I was voted fourth out of 380 trainers in the nation and first on my topic of time management.

I share this to illustrate the importance of being responsible and accountable. If I had not held myself accountable and learned to get better, I would have been bounced out of my position. When you make people walk the line and hold them accountable, the results can be so much higher.

Who benefitted from me being held accountable? I did because I got better, and also my audience because they enjoyed a better quality presentation. None of us should be willing to settle for less.

What do you value more, experience or results? To my definition, experience is a feature and results are the benefit. In any business, clients are concerned with benefits and want to see results.

Experience is a nice feature, but if someone has 10 years of experience and someone else 20 years, that alone doesn’t indicate quality work.

For example, I lost a major consulting contract to another person; it came down to us two. My greatest frustration was that the client wanted time management as the subject. At the time, I had finished first in the country out of 80 people who taught that for my employer, the seminar company. The client said that the other person had more industry “experience.”

I warned the client about the difference between experience and results, because you pay someone for what they can do for you, the result they can achieve, and not how many years of experience they have.

In a recent conversation with the client after the training, I asked him how it went. He said “Okay,” and then went on to tell me that he probably wouldn’t use that vendor again. I was upset because I knew I could have delivered the results that he wanted, but he made the decision.

What do we practice in our organizations? Do we hold ourselves accountable? Do we preach experience to our clients, or do we preach results?

Organizations like the NFL, NBA or major league baseball recognize results more than experience. That’s one of the reasons people are fans and watch the games, and why the competition and the talent gets better every year, because they are results focused.

In organizations like our schools, some government jobs or other functions, experience often seems to weigh heavier than results, which may account for some of the situations we find ourselves in today. Does your organization value experience more than results? “She must be a good employee; she has 20 years of experience.” Maybe she is a great employee, or maybe she has just “survived” this long.

My high school football coach, Dominick Ciao, had a saying that if we won a game it was our victory, but if we lost a game it was always on him. This really taught me about responsibility, in that he always took the blame and the burden when we lost a game, but he always gave us the credit and the victory when we won.

“All business depends upon men fulfilling their responsibilities.” Mahatma Gandhi

Land of the Critics

After every major sporting event, public speech, or just about anything, we realize that we live in a land of critics, where people are always judging others, knocking somebody down, and playing Monday morning quarterback. “This is what they should have done and this is what they need to do next time.”

This reaction speaks to the abdication of responsibility. We can critique someone else all day long, but at the same time many of us are not even willing to get in the game.

For example, a guy watching a TV football game might be 50 pounds overweight, but when he sees a football player miss a tackle, he rants at that player. “Oh, my gosh! I can’t believe how that guy missed him. That was ridiculous. That was one of the easiest tackles. I could have made that play.  He should have had that.” This guy might have never played football and may have no idea what the physical and mental demands are. He would serve himself better by getting back into the game of health and fitness. Generally, we’re easier on ourselves and harder on others.

We live in a land of critiques, so before we judge others, let’s do an internal look first.

A segment of our population, Generation Y is called the entitlement generation because they have not been held accountable for most of their life. Helicopter parents have hovered over them, and it is just assumed that mom or dad rescued them whenever they got into trouble. The “they can do no wrong” attitude has crippled them, and it is crippling our society.

When you don’t teach someone to be responsible and about accountability, or if they don’t learn how to be accountable at an early age, they have a very different learning curve. Here are some ways to teach accountability to a young person.

For example, a dad has this conversation with his daughter. “Sara, you didn’t get a good grade on your math test. You got a D, so you can’t sleep over at Becky’s house tonight.”

But dad has been away all week and feels guilty for not being with Sara, so he lets her go to Becky’s out of his own guilt and doesn’t hold her accountable for her bad grade.

What does Sara learn from this experience? Unfortunately, she probably learns that she won’t be held accountable for her future actions because there are no consequences.

Eric Papp is a leadership speaker/author and business philosopher. He is the author of “Leadership by Choice” and president of Results-Based Seminars, LLC. His website is EricPapp.com