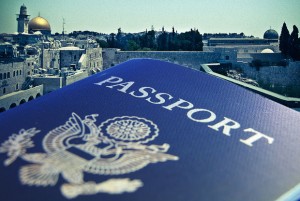 AJC regrets today’s District of Columbia Court of Appeals decision that an American citizen born in Jerusalem cannot list Israel in his U.S. passport as his place of birth.

The court ruled that the responsibility of issuing passports is shared by the legislative and executive branches of government, and that a ten-year-old law “infringed” on the prerogative of the executive branch.  The law, Section 214(d) of the 2003 Foreign Relations Authorization Act, was ruled unconstitutional by the appellate court.

Second 214(d) provides that when a U.S. citizen is born in Jerusalem, “the Secretary [of State] shall, upon the request of the citizen or the citizen’s legal guardian, record the place of birth as Israel.”

“The appellate court’s ruling that section 214(d) is unconstitutional is unfortunate, as it undermines the existing balance of power between the Congress and Executive branch in foreign policy,” said AJC General Counsel Marc Stern.

The Supreme Court, in an 8-1 decision last year, had remanded the case of Zivotofsky v. the Secretary of State to the Court of Appeals to decide whether the President must follow a congressional directive to list “Israel” in the passports of Americans born inJerusalem.

“An American passport, not the current and future status of Jerusalem, is the core issue in the Zivotofsky case,” said Stern. “No one should be surprised if the Zivotofsky family petitions the U.S. Supreme Court to hear their case again.”