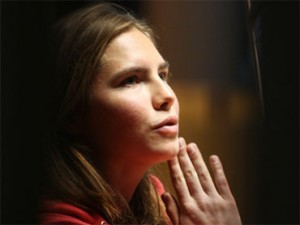 In what is being described as a “powerful” and “eloquent” defense in the Italian language, Amanda Knox persuasively presented her own defense and the reasons why she should be acquitted.  Knox was convicted in the 2007 murder of a British young lady who was an exchange student in Italy. Knox, a student herself, was convicted with her Italian boyfriend at the time, Raffaele Sollecito. The media had projected for quite some time that she would, in fact, be freeed after an appeal, but her own attorneys were more cautious than optimistic.  In the end, the media proved to be correct. The following is a round up of how this breaking news was treated:

National Public Radio noted that “the appeals court cleared Knox of the murder Monday evening, reportedly deciding that she was guilty only of ‘defamation’o f the police in the case. That charge was the first result the judge read aloud in court, drawing a stunned look from Knox, according to Bill Neely of ITV. The judge then continued to announce the findings on charges of murder and related crimes, of which Knox has now been found innocent, along with her co-defendant, Italian Raphaele Sollecito, her former boyfriend.”

Forbes had the following to add: “The frightening saga of Amanda Knox, an American student who was convicted of murdering her roommate Meredith Kercher in Italy in 2007, has finally drawn to a close. An Italian court has thrown out Knox’s 2009 conviction. After four years in an Italian prison cell, Amanda Knox will finally go free. Knox was not guilty of the charges against her. She was tried largely in the tabloids and the court of public opinion. Her case was badly mangled by Italy’s postal police, and the trial was more of a show trial than anything, with headlines declaring her a sex-crazed monster and impugning her reputation with no facts to support them.”

The Austrilian had the following to say about the case: “US student Amanda Knox has been acquitted of murder and sexual assault by an Italian court after breaking down in court and pleading for mercy in a dramatic end to her four-year legal battle. “She is expected to be released within hours from her prison in Perugia. There were cries of “Shame! Shame!” and “Murderer!” from an angry crowd outside the courtroom immediately after the verdict. It overturns the 24-year-old’s convictions for the grisly killing of her British housemate Meredith Kercher on November 1, 2007 in the university town of Perugia in central Italy where both young women were studying. Her boyfriend at the time, Raffaele Sollecito, who was appealing with Knox, was also acquitted of the charges, leaving only one person convicted – local drifter Rudy Guede, who like the other two has always denied murder. Knox was convicted today on one charge of slander, relating to allegations she made against police. She was sentenced to three years but has already served four years on the now-overturned murder charge.”

For more stories about Know visit here.
All opinions expressed on USDR are those of the author and not necessarily those of US Daily Review.