They may not be playing in the Final Four this weekend, but for the third year in a row, the Duke Blue Devils are America’s Favorite College Basketball team. The overall number one seed for this year’s NCAA Men’s College Basketball tournament, Kentucky, is number two on the list up from number 4 last year. This is the highest Kentucky has been since 2004 when they were tied for second place. And, last year’s number two, North Carolina dropped one spot to number three this year. 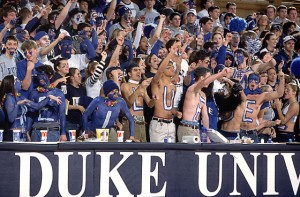 Rounding out the top five favorite college basketball teams are two teams who are both returning to the list after absences of a few years and who are tied for the fourth spot: Michigan—who hasn’t been on the list since they were tied for number 8 in 2007—and Michigan State, who returns to the list after having been number 10 in 2003. While all five started in the tournament, only one of the top 5 favorite college basketball teams has a chance at becoming this year’s national champion – Kentucky.

These are some of the results of The Harris Poll of 2,451 adults surveyed online between March 12 and 19, 2012 by Harris Interactive.

Looking at the remaining 5 teams in the top ten, again only one has a shot at becoming national champion. Down one spot from last year, at number 6 is Syracuse and making their debut at number 7 is Missouri. Two teams tied for the number 8 spot – Connecticut, who returns to the list after a one year absence and Texas who was number 9 last year. And, rounding out the top ten, dropping from number 3 last year is Ohio State who will be playing this weekend in the Final Four.

College sports are big business and for 3 weeks every March, the focus is all on basketball. The term “Madness” applies as number 2 seeds fall in early rounds and number 14 seeds move on and everyone looks for which team will be this year’s Cinderella. Among all adults, one-quarter (25%) follow men’s college basketball and one in ten (9%) follow women’s college basketball. But, as brackets are discussed and some companies see a spike in sick days during the first two days of the tourney, it seems like a lot more people may follow college basketball this time of the year.

This Harris Poll was conducted online within the United States between March 12 to 19, 2012 among 2,451 adults (aged 18 and over), of whom 615 follow college basketball. Figures for age, sex, race/ethnicity, education, region and household income were weighted where necessary to bring them into line with their actual proportions in the population. Propensity score weighting was also used to adjust for respondents’ propensity to be online.