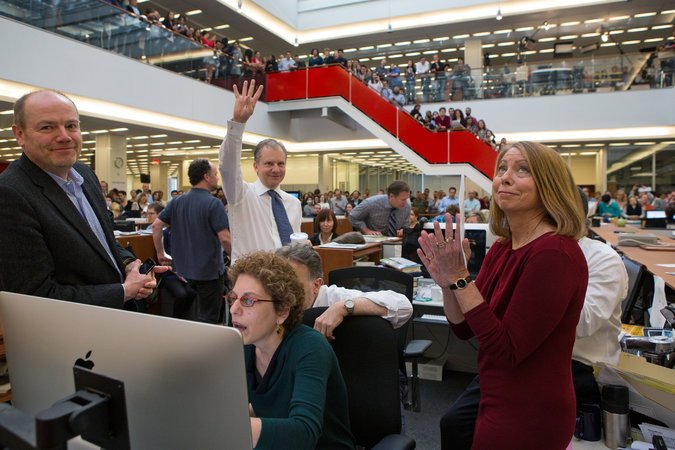 Jill Abramson was recently ousted from her position as the executive editor of the New York Times for being, among other things, too “pushy.” But did Abramson— who has also been described by the media as “polarizing” and “brusque“— know during the course of her tenure that others viewed her as being overly assertive? A new study from the Columbia Business School suggests that there’s a great chance she didn’t.

“Finding the middle ground between being pushy and being a pushover is a basic challenge in social life and the workplace. We’ve now found that the challenge is compounded by the fact that people often don’t know how others see their assertiveness,” said Daniel Ames, professor of management at Columbia Business School and co-author of the new study. “In the language of Goldilocks, many people are serving up porridge that others see as too hot or too cold, but they mistakenly think the temperature comes across as just right—that their assertiveness is seen as appropriate. To our surprise, we also found that many people whose porridge was actually seen as just right mistakenly thought their porridge came off as too hot. That is, they were asserting themselves appropriately in the eyes of others, but they incorrectly thought they were pushing too hard.”

Based in part on research previously conducted by Ames and former Columbia Business School professor Frank Flynn, the new study is called, “Pushing in the Dark: Causes and Consequences of Limited Self-Awareness for Interpersonal Assertiveness” and will be published in Personality and Social Psychology Bulletin this month.  In short, the research shows that many people seen by others as under-assertive or over-assertive think they’re appropriately assertive. The study also reveals that people seen as getting assertiveness right often mistakenly think they’ve gotten it wrong.

Ames and fellow researcher Abbie Wazlawek—a doctoral student at Columbia Business School—conducted four studies to test their hypotheses about the connection between assertiveness and self-awareness. Three of the four studies involved participants who were MBA students enrolled in negotiation courses at Columbia Business School, and one study involved an online survey of 500 U.S. adults.

The studies found that, generally speaking, negotiators have a lot of work to do in the self-awareness department. For example, one study found that:

“Most people can think of someone who is a jerk or a pushover and largely clueless about how they’re seen,” said Ames. “Sadly, our results suggest that, often enough, that clueless jerk or pushover is us.”

The researchers were surprised to discover another pattern in their results. Ames and Wazlawek found that many people getting assertiveness right mistakenly thought they were seen as pushing too hard. In multiple studies, Ames and Wazlawek observed a good share of people displaying what they called the “line crossing illusion.” These people believed that they came across as being too assertive—or had crossed a line— during negotiations, when in fact their counterparts saw them as being appropriately assertive.

While the “line crossing illusion” might seem like a harmless or even endearing mistake, Ames and Wazlawek showed that it can be costly. Those who mistakenly thought they had over-asserted themselves were more likely to try to repair relationships with their partners, sometimes agreeing to a less valuable subsequent deal just to smooth things over. As the researchers put it, these negotiators were attempting costly repairs for something that wasn’t broken. The result was that both sides frequently lost out on what could have been a better deal.

For more information on cutting-edge research being conducted at Columbia Business School, please visit our online magazine, Ideas at Work.

Columbia Business School is the only world–class, Ivy League business school that delivers a learning experience where academic excellence meets with real–time exposure to the pulse of global business. Led by Dean Glenn Hubbard, the School’s transformative curriculum bridges academic theory with unparalleled exposure to real–world business practice, equipping students with an entrepreneurial mindset that allows them to recognize, capture, and create opportunity in any business environment. The thought leadership of the School’s faculty and staff, combined with the accomplishments of its distinguished alumni and position in the center of global business, means that the School’s efforts have an immediate, measurable impact on the forces shaping business every day. To learn more about Columbia Business School’s position at the very center of business, please visit www.gsb.columbia.edu.