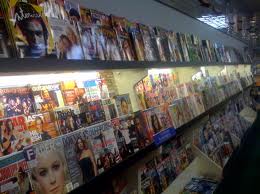 Let me just start by stating that I love magazines (I actually have as many as 6 or 7 subscriptions at any one time). For many years I wanted to eventually have a magazine of my own, but with economic drivers being as there are (and reflected in this column), a website such as USDailyReview.com was much more sensible. In spite of the pounding that print has faced in general due to the Internet, new magazines still seem to be popping up, but their future is still doubtful since with every new one there are several that fail. I believe that magazines are shrinking, both in size and importance, and this is reflected by the following indicators:

Still, I love magazines and I would not be surprised if I increase my subscriptions (since they practically give them away). But an ominous cloud hangs over the future of all print publications.