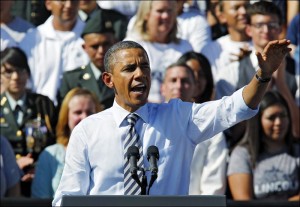 M-F at 7 am CST on Business Talk 1110, hosted by US Daily Review Publisher/Editor in Chief, Kevin Price.
In a story largely ignored by the “mainstream media”, President Barack Obama recently made a campaign stop on which he decided to preach the “virtues” of Planned Parenthood and told young people to be in charge of their own bodies, receiving applause.  This is an interesting story, one largely not covered by the national media.
Fred Lucas of CNS News and Kevin Price discuss it on a recent Price of Business.
All opinions expressed on USDR are those of the author and not necessarily those of US Daily Review.