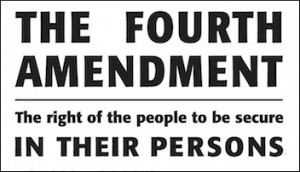 While the country has been distracted with Obamacare and Trayvon Martin, our fourth amendment has been endangered. By a 5-to–4 vote officials may now strip-search people arrested for any offense; however minor, before admitting them to jail says the Supreme Court.
We’re not talking hard criminals here, how about your daughter, your son, your niece, your wife. These are not serious crimes either, maybe you’ve violated a leash law, driving without a license, failing to pay child support. Or maybe you’re the hard criminal and you’re being arrested for driving with a noisy muffler or failing to use a turn signal.
The ruling handed down by the Supreme Court is about as far reaching and disturbing as anything the court has ruled on in a hundred years! It’s more disturbing to our freedom and constitutional rights than Obamacare, yet the spotlight was not nearly as bright as the media and public scrutiny on the unconstitutionally of health care reform. You may not think this will ever impact you or your family; but don’t be surprised one day when you find yourself naked in a police station with your genitals exposed and fingers in places that leave you a tad uncomfortable. Imagine the sense of guilt and humiliation, as officers standing close by gawk, smirk and size you up – all in the name of justice!
How did it all come down to this? Albert Florence was pulled over by New Jersey state troopers while he was driving to his parents’ house with his wife and son. The trooper arrested him for failing to pay a previous fine – even though he actually had paid the fine. Just a simple bookkeeping error.
Florence was taken into custody at the Essex County Correctional Facility, which coincidentally has a strip search policy for all new arrestees. Florence was forced to remove his clothes, lift his genitals to show that he was not hiding anything, and cough in a squatting position. Florence said he was strip searched twice.
After his release, Florence sued, arguing that strip searches of people arrested for minor offenses violate the Fourth Amendment.
Many courts have supported what Florence argued – that the Constitution prohibits strip searches of people arrested on minor offenses unless there is suspicion of concealing weapons, drugs, or other contraband. Ten states – including Florida and Michigan – actually make strip searches illegal without cause.
Justice Breyer, writing for the four dissenters, said the strip-searches the majority allowed were “a serious affront to human dignity and to individual privacy” and should be used only when there was good reason to do so. Justice Kennedy goes on to say that courts are in no position to second-guess the judgments of correctional officials.
So let’s give more power to a profession that is clearly thirsty for more power – makes sense right?
The law of the land will now be ”Bend Over and Spread ‘Em” no matter what the offense, no matter how minor, no matter what your socio-economic status is – you may very well find yourself or a loved one at the mercy of your local law enforcement.
My hope is that a family member of one of the Justices gets pulled over for some technicality and then strip searched, embarrassed and humiliated, all in the name of JUSTICE.
Time to Get Involved, Get Loud & Think on the Brink