Is it a bird? Is it a plane? No, it’s a DomiCopter! Scooters and cars could one day be swapped for 21st century flying machines following exciting technological research undertaken by Domino’s Pizza.

The DomiCopter is a lightweight flight aircraft, capable of travelling vast distances at high altitudes all whilst carrying Domino’s pizzas.

Sci-fi comics and movies have illustrated the next generation of flying machines for years. The DomiCopter can potentially climb hundreds of metres to reach its destination without the need to refuel, whilst also being incredibly eco-friendly – meaning a revolutionary way to deliver food.

As shown in the video, which is now available at http://bit.ly/GDCopter pizzas would be carried by the DomiCopter in the Domino’s Heatwave bags. The bags, which were a key breakthrough in Domino’s pizzas retaining their heat, could now be utilised with another technological breakthrough – the DomiCopter. 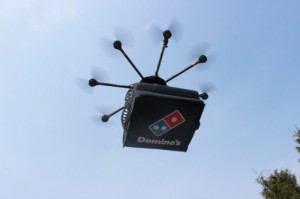 “At Dominos we’re always looking to innovate and find new ways to deliver our pizza and a DomiCopter could fit the bill perfectly,” said Simon Wallis Sales and Marketing Director at Domino’s. “We are the number one pizza delivery company and we are committed to staying in that position. What better way to totally avoid the traffic than to fly – if anything this will now make us even quicker! We think it’s a great way to reinforce that Domino’s go to more lengths than anyone to deliver great pizza.”

A Domino’s Flight Academy is also rumoured to be in the pipeline should the DomiCopter delivery service take off.