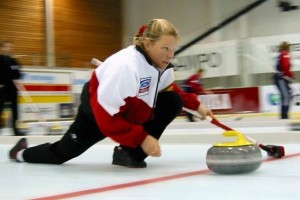 I curl…yes, my straight hair. But I curl…you know, throw rocks down the ice and sweep? You remember that from the Vancouver Olympics, right? I do that on a regular basis during winter. From October to March, I am sliding and sweeping winter away. It is great exercise and a fabulous team sport that doesn’t cost a lot to get involved. Curling club dues do need to be paid if you want to continue curling after an open house or instructional league but they usually have a good supply of brooms and sliders to get you started. There are over 100 curling clubs in the United States including several in Texas, Florida, Arizona and California. These clubs offer open houses to try out curling for a reasonable rate. In some clubs, two or three generations of curlers reside and couples often meet and marry after sweeping stones across the ice. In Wisconsin and Minnesota, there are high school curling teams. At the college level, there is plenty of competition. I curl at Bowling Green State University’s Ice Arena and belong to the Bowling Green Curling Club.

This past weekend, I went to Detroit for a Ladies 5 and Under competitive bonspiel – this means we have been curling for five years or less. There is a great deal of difference between us. I get to curl once a week. Another lead (the person who throws first) had as much play time in three months as I did in almost two years. That is a function of location and access – I live too far from my curling club to be able to go more than once a week. In any case, we did well for four people who had never played together and two of them had not played since Christmas. My team partner and I curled with two women from the Fort Wayne club. It was great fun and I’m glad we were able to form a team.

There was an American renaissance of sorts in curling in the United States after the Vancouver Olympics. Because the venue was well within a time zone we could watch on the East Coast, we did. The personalities, if you watch more curling, are very compelling. Canada seems to own this sport and they have thousands of curling clubs across the country. You need ice, preferably dedicated ice that is not cut up by skaters and hockey, stones, equipment and the ability to prepare the ice properly. There are clubs in unlikely places – Florida, Texas (Houston, Dallas/Fort Worth, and Austin), Arizona and southern California. Oklahoma City, Wichita, Omaha, and Atlanta have clubs. The lion’s share is across the northern tier of the United States from New England in an arc around the Great Lakes to Minnesota and into the Dakotas. There are clubs in Washington State and Alaska. Even Hollywood, California has a curling club!

When I get into a conversation about curling, the first question is usually “Isn’t that where you throw those rocks and sweep?” That gives me a chance to explain how to sweep. There is a bit of physics behind it. And throwing a stone isn’t simply force alone. The stone needs rotation – more rotation and it bites the ice; less rotation and it moves more freely. Over time, you learn how to throw different weights depending on what the skip (team leader) calls. Some use terms like “hack weight”, which means your stone weight will move the stone from one hack to the other. Others use the Ferbey system, developed by Canadian champion curler Randy Ferbey, which use numbers to determine weight. The weight is determined by how long it takes the stone to move. Throwing a seven or eight weight is a draw, meaning you want the stone to slow, which means more curl, and get as close to the center of house (the “bullseye” at each end of the ice sheet) as possible. Okay, I’m getting technical here. It’s easy to do that. I geek that way.  I throw lead (first) and I love throwing lead. And I don’t mind explaining any aspect of curling. Just ask.

Between the games, we sit with the team we just played and chat. The winning team buys drinks for the losing team. I’m happy to say I was able to buy drinks this weekend. We talk curling, how we got started, what bonspiels we’ve attended, how we like it and how people react when we tell them there’s curling available close by. There are clubs in this country that have been around for over 100 years. I met a 49-year curler this weekend named Joe Livermore. The arena at Detroit is named after him and he was a wealth of information about the history of curling in Detroit, let alone the history of curling in the United States period. We eventually drift into conversations about our families and our club experiences as we become more comfortable with our new friends. But in a curling club, you are quite literally not a stranger but a friend we haven’t met yet. There is a congeniality that I have never found anywhere else. Curling is a reason to like winter in the north for this Florida girl. Now…if we can only get Tim Tebow out on the ice…