by Candace E. Salima, Contributor of US Daily Review 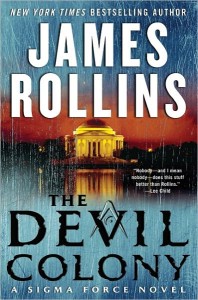 The Devil Colony by James Rollins, released June 21, 2011, is the latest in his Sigma Force series, and is a page-turner you will not want to put down. Rollins combined nanotechnology, the Yellowstone caldera, ancient and early American history, Native American legend, Jewish history, and gave us a story that takes  us on an unbelievable ride through history. He skillfully wove these elements together and then added in Sigma Force and their nemesis, The Guild, and threw the reader right into the middle of the story.

The book opens high in the Uintah mountains of Utah where a long-protected secret is about to be revealed, much to their peril, by two teenagers determined to explore forbidden caves, where they make a remarkable find. And the story doesn’t slow down through 496 pages. I read it in one night and immediately started it over when I finished it.

I had a chance to interview James Rollins in June and he was fascinated by the undeniable evidence of the fourteenth colony, the Iroquois nation. Found within the tombs of America’s recorded history, Rollins dug deep to discover as much as he could. Was there indeed a fourteenth colony? Was there a founding father left out of the tomes of America’s founding? Was there a nod to this Iroquois chief in the great American seal?

James talks about these very things in a video. Listen as he talks about what led him to the discovery of the fourteenth colony. Click here to listen James Rollins talks about The Devil Colony.

James Rollins said of the researching and writing The Devil Colony: “I had great fun researching this novel set in my own backyard (so to speak). For the past decade, I’ve been fielding questions from readers about setting a Sigma novel within the United States. But I knew it had to be the perfect story, a novel thrilling enough to justify coming home. I’ve been searching for that story for about five years, and when I finally discovered it, the book still took me a full two years to write. It’s one of the biggest and most shocking of my novels. It took me trekking across the country and back, from Washington, D.C. and Fort Knox out east, to Salt Lake City and Yellowstone National Park out west. I interviewed Mormon scholars, read scientific and historical abstract, and studied ancient petroglyphs. It is a story never told—but one that needs to be finally revealed after two hundred years of secrets.”

The bookliner of The Devil Colony is one of the best I’ve ever read:

From New York Times bestselling author James Rollins comes a novel of boundless imagination and meticulous research, a book that dares to answer a frightening question at the heart of America: Could the founding of the United States be based on a fundamental lie? The shocking truth lies hidden within the ruins of an impossibility, a lost colony of the Americas vanished in time and cursed into oblivion. A place known only as The Devil Colony.

Deep in the Rocky Mountains, a gruesome discovery—hundreds of mummified bodies—stirs international attention and fervent controversy. Despite doubts about the bodies’ origins, the local Native American Heritage Commission lays claim to the prehistoric remains, along with the strange artifacts found in the same cavern: gold plates inscribed with an unfathomable script.

During a riot at the dig site, an anthropologist dies horribly, burned to ashes in a fiery explosion in plain view of television cameras. All evidence points to a radical group of Native Americans, including one agitator, a teenage firebrand who escapes with a vital clue to the murder and calls on the one person who might help—her uncle, Painter Crowe, Director of Sigma Force.

To protect his niece and uncover the truth, Painter will ignite a war among the nation’s most powerful intelligence agencies. Yet an even greater threat looms as events in the Rocky Mountains have set in motion a frightening chain reaction, a geological meltdown that threatens the entire western half of the U.S.

From the volcanic peaks of Iceland to the blistering deserts of the American Southwest, from the gold vaults of Fort Knox to the bubbling geysers of Yellowstone, Painter Crowe joins forces with Commander Gray Pierce to penetrate the shadowy heart of a dark cabal, one that has been manipulating American history since the founding of the thirteen colonies.

But can Painter discover the truth—one that could topple governments—before it destroys all he holds dear?

Purchase The Devil Colony now. It is another “must buy” and addition to your home library. And if you’re a reader of all of James Rollins’ Sigma Force novels, you will gasp aloud at the very last sentence in the book! I did.  (5 Stars)
Candace E. Salima is a syndicated talk show host, author, and columnist.  Learn more about her at www.CandaceSalima.com.
All opinions expressed on USDR are those of the author and not necessarily those of US Daily Review.