WHAT:  The Boston Tea Party comes alive this December!  It’s December 16th, 1773 and trouble is brewing in Boston.  Presented by Boston’s famed Old South Meeting House and the Boston Tea Party  Ships  &  Museum,  the  243rd Boston  Tea  Party  Anniversary & Annual Reenactment is an opportunity for the public to experience one of America’s most iconic public protests.  Reenactors from across New England theatrically tell the story of The Boston Tea Party and recreate the evening of December 16, 1773 which sparked the American Revolution. It all begins with a fiery tea tax debate at Old South Meeting House, the actual historic hall where the colonists congregated 243 years ago. Then, the public joins a lively procession to the waterfront and witnesses as the Sons of Liberty destroy 220lbs of actual loose [expired] tea into Boston Harbor.  The tea is supplied byLondon’s East India Company, the same company from where the original tea came in 1773 and is still in existence  today! 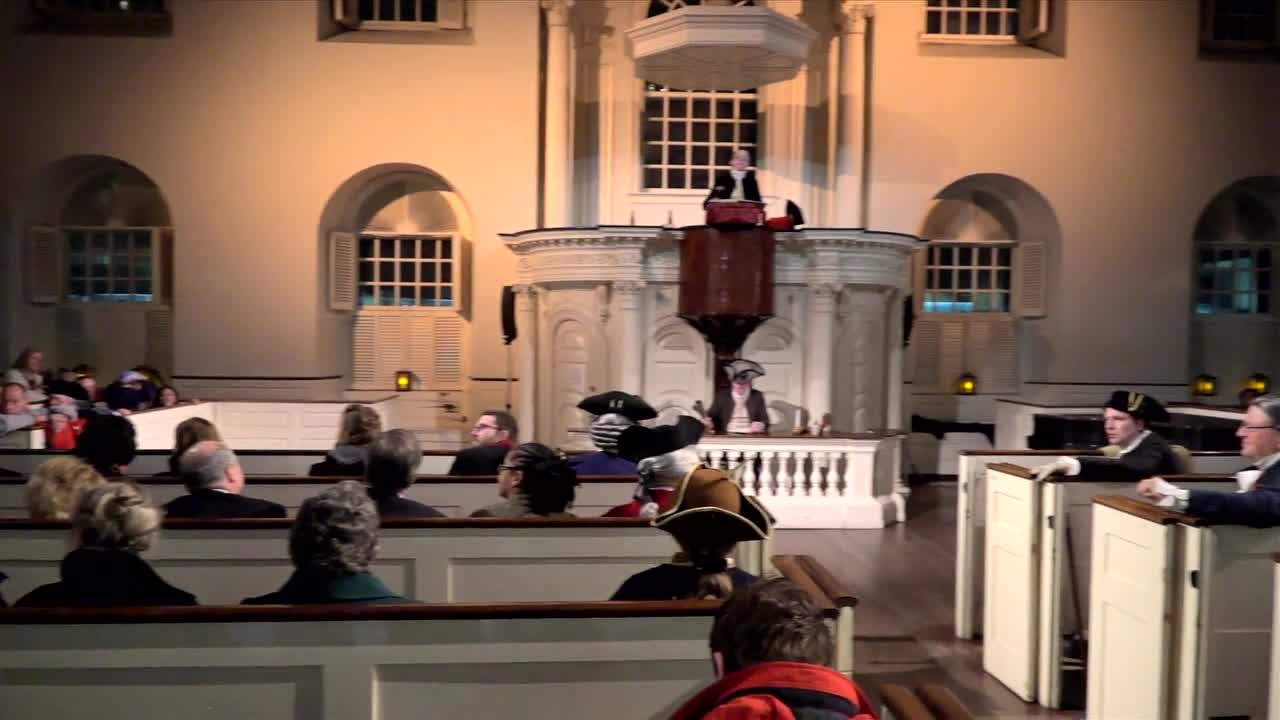 6:30 – 7:30 p.m.
The Meeting of the Body of the People – TICKETED EVENT (Ticket includes admission to the meeting at the Old South Meeting House plus special reserved viewing access along Boston’s historic waterfront for the Destruction of the Tea)
Old South Meeting House – 310 Washington Street at Milk  Street
Ticket holders join an authentic, spirited and theatrical colonial debate at Old South Meeting House to protest the tax on tea (“No taxation without representation!”) just as unprecedented numbers of colonists gathered in this very building 243 years ago. Samuel Adams, John Hancock, Paul Revere and other Patriot leaders join in a heated debate with crown-loving Loyalists in this final attempt to peaceably resolve  the crisis before the midnight deadline.  Visitors are encouraged to join the debate, letting their voices be heard in the very place where Boston’s most famous act of rebellion  began.

7:30 – 8:00 p.m.
Huzzah to Griffin’s Wharf! – OPEN TO THE GENERAL  PUBLIC
Procession from Old South Meeting House to the Boston Tea Party Ships & Museum – Milk Street to Congress Street to Pearl  Street
Led by fife and drums and accompanied by colonial reenactors (in addition to a number of Redcoats along the way), the public is invited to march from Old South Meeting House to Boston’s historic waterfront where Griffin’s Wharf once stood along the same route the Sons of Liberty took to Boston Harbor to destroy the tea in  1773!

8:00 – 8:30  p.m.
Boston Harbor, a Tea Pot Tonight!  – OPEN TO THE GENERAL PUBLIC (Ticket holders have access to a reserved viewing area on the  Harborwalk)
Destruction of the Tea at the Boston Tea Party Ships & Museum – 306 Congress St.
The public is invited along with the reenactors to line the shores of Boston Harbor and watch as the Sons of Liberty storm aboard the Brig Beaver and destroy chest after chest of East India tea, just as colonists did 243 years before.  In this fully narrated program, the Sons of Liberty board the ship, opening the hold and hoisting tea chests on deck.  Tea chests are broken open and actual tea from London’s East India Tea Company is spilled into Boston’s historic waters. Viewers cheer “Huzzah!” as each chest of tea is dumped into Boston Harbor as they witness the dramatic conclusion of this single most important event leading up to the American  Revolution.

Tickets include admission to the Meeting of the Body of the People at Old South Meeting House and access to an exclusive reserved viewing area on Boston’s Harborwalk for the Destruction of the Tea. All ticket proceeds help support Old South Meeting House, a non-profit National Historic Landmark.  This event takes place rain, sleet, snow or shine. For general information on the annual reenactment, go to:  www.December16.org.

This package is available year-round and is based on double occupancy, blackout dates apply. To book, call InterContinental Boston directly at 617-217-5033 or 877-747-BOSTON. The hotel is located at 510 Atlantic Ave. overlooking the Boston Tea Party Ships &  Museum.

OFFERED THE EVENING OF THE BOSTON TEA PARTY ANNIVERSARY/REENACTMENT ON FRI., DEC. 16, 2016 –

ABOUT OLD SOUTH MEETING  HOUSE:
Famed as the place where the Boston Tea Party began, the 1729 Old South Meeting is one of the nation’s most important colonial landmarks and was the center for Boston’s protests against British rule in the years leading to the American Revolution. Saved from demolition in 1876, this treasured National Historic Landmark has been open to the public since the as a non-profit historic site, museum and an active center for public dialogue and free express in the heart of downtown Boston.  The Old South Meeting house is a 501(c) 3 organization supported by The Massachusetts Cultural Council and other public and private funders.  Presenting exhibits, rare artifacts and a full schedule of programs and events year-round and open daily 9:30 a.m. – 5:00 p.m. from April 1 – Oct., 31, and 10 a.m. – 4 p.m. from Nov. 1 – March 31.  Closed on Thanksgiving, Christmas Eve, Christmas Day and New Years Day. For more information, visit www.osmh.org, info@osmh.org or call 617-482-6439. Old South Meeting House is located at 310 Washington St., at the intersection of Milk St. in Boston,  MA.