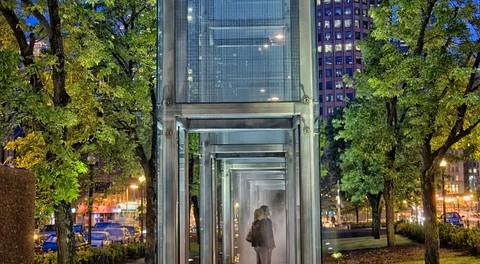 The following release is being issued on behalf of Holocaust Survivors Foundation  USA:

We are heartbroken and angry that the Holocaust Memorial in Boston was vandalized, this week.   As Holocaust survivors, we are profoundly saddened by the outrageous expressions of hatred, bigotry, racism, and anti-Semitism that seek to poison our society, and the failure of the President to categorically condemn the dangerous people threatening the fabric of our democracy.   It is difficult for us to comprehend how such venom has become acceptable to a so much of the American  public.

The symbolism of having a Holocaust Memorial attacked at a time of growing extremism, whether it calls itself white supremacy, neo-Nazism, racism, anti-semitism, or Fascism, is not only painful to witness, it is dangerous to the  public.

We, the remaining voices for six million Jews who were murdered because of the “normalization” of such bigotry in Nazi Germany and Europe, are speaking out to sound the alarm loud and clear.   Our losses were real — our grandparents, parents, brothers, sisters, cousins, aunts, and uncles, were all murdered because people in the 1930s did not take action to stop the spread of hate and bigotry.   Three deaths in Charlottesville this week are too many already, but we know from experience there will be more unless people of good will – from our national leaders to each one of us in our communities – take action to condemn these  forces.

The recent attack in Boston, in the shadow of the Charlottesville terror, is especially painful because the Boston Holocaust Memorial was built on a foundation of love and commitment to humanity of our beloved colleague Izzy Arbeiter.  Izzy served for over 30 years as the President of the Holocaust Survivors of Greater Boston, and personally devoted thousands of hours teaching people of all backgrounds about the horrors of the Holocaust.  Though all of us experienced the ultimate trauma, and have worked hard to preserve the memory of our loved ones and not let the world forget the evil and indifference that led to the Holocaust, Izzy’s imprint in Boston and the world has been unique and extraordinary.  Our love and support go out to Izzy and all of Holocaust survivors in Greater Boston and New England at this difficult time, and we redouble our determination to stand strong against hatred, racism, white supremacy, bigotry, neo-Nazism, Fascism and anti-semitism wherever we see  them.

For more information, go to:  http://www.hsf-usa.org