By Auction.com, LLC, Special for  USDR

Auction.com, LLC, the nation’s leading online real estate marketplace, today released its Q2 2015 Commercial Real Estate (CRE) Market Monitor™, which reveals that the CRE market is starting to show signs of stabilizing following a multi-year period of run-up and appreciation. After CRE deal volume bucked its typical cyclical trend by increasing in the first quarter from Q4 2014, volume declined 14.6 percent in the second quarter to $112.4 billion, but remains 24 percent higher than a year ago. The Q2 dip marked the first time since 2008 that total five-sector deal volume dropped on a quarter-over-quarter basis. Meanwhile, the hotel sector’s prices remain on the uptick, keeping it in the CRE spotlight with the strongest post-recession recovery of all sectors, outside of, perhaps,  apartments.

“It’s unclear whether the Q2 drop in sales volume is the beginning of a slowdown in the CRE market, or simply an adjustment from an unusually strong first quarter,” said Auction.com Executive Vice President Rick Sharga. “What’s clear is that all of the major CRE sectors continue to perform far better than they did a year ago, and may be strong enough to withstand a potential decline in international investment activity due to the economic issues in China and  Europe.”

Europe has continued to struggle with high unemployment and low growth, leading the European Central Bank to start its own Quantitative Easing program to get lending and growth flowing again. This is especially important on the heels of the vote on Greece’s future in the Euro. This has depressed European interest rates compared to U.S. rates, which have risen throughout the year from 1.8 percent on the 10-year yield in January to 2.2 percent currently. The disparate monetary policies have the potential to shift capital flows away from the U.S. into Europe. This is only exacerbated by the surging U.S. dollar, which further dissuades international capital flows into the U.S. The combination of the rising dollar, interest rates and falling oil prices has greatly diminished the outlook for capital flows from Europe, South America, OPEC and Norway. The tenuous state of China’s economy also casts a shadow of uncertainty regarding CRE transaction  trends.

“High liquidity in the commercial real estate market, reinforced by persistent price growth and tight cap rates, paints a picture of a strong, competitive market that has investors exploring secondary and tertiary markets and asset classes in the pursuit of high yields,” said Auction.com  Chief Economist Peter Muoio. “Of the five major sectors, the hotel sector is able to stand apart from the rest of the CRE markets’ recent dip thanks to a recovery in disposable household income, due to home price appreciation and cheaper energy costs that is leaving more money in consumers’  pockets.”

Both hotel and retail sector pricing continue to work their way back toward pre-recession peaks, in contrast to the office, industrial, and apartment sectors, which have already surpassed these levels, according to the CPPI. Industrial prices hit a new peak in the first quarter before edging back in the second, but they remain 0.8 percent higher than their pre-recession top. This reflects the surge in the industrial sector’s recovery since early 2013, which is also substantiated by quickly improving  fundamentals.

The hotel sector being a notable exception, the other four major real estate sectors have seen year-over-year price growth stabilize between 10 and 20 percent. The pace of annual growth in retail pricing had been slowing down from mid-2013 through mid-2014, but has recovered since then. Hotel price growth will likely cool down in the quarters to come but remain strong, since operating conditions, including room demand, average daily room rates, revenue per available room (RevPAR), and occupancy rates remain at or near all-time  peaks. 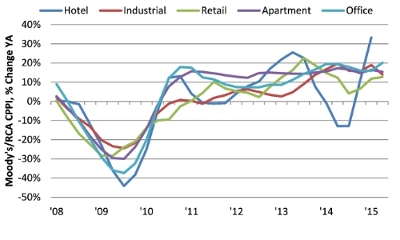 Auction.com’s calculations of CRE risk premiums show that they declined in the second quarter across all five CRE sectors. The 10-year U.S. Treasury rate, the other component of cap rates, jumped from 2 percent in Q1 to 2.4 percent in Q2, breaking a string of five straight quarterly  declines.

“The Federal Reserve is expected to increase interest rates at some point in 2015, potentially as early as September, which would lead to increases in the 10-year U.S. Treasury rate, and potentially put upward pressure on cap rates,” said Auction.com Chief Economist Peter Muoio. “The risk premium serves as a buffer against the impact of rising interest rates on cap rates, but the Q2 decline in risk premiums chips away at this buffer, leaving cap rates more exposed to upward pressure on interest  rates.”

Because of the Q2 increase in the 10-year U.S. Treasury rate, which jumped 40 bps on the quarter, cap rates generally leveled off or increased from the first quarter. All five sectors’ cap rates remain significantly below their 10-year average, but office and hotel cap rates jump 10 bps, while retail and apartment cap rates held steady. Only industrial cap rates compressed, tightening another 10 bps to 6.9  percent.

Muoio noted, “With the Federal Reserve likely to increase interest rates in the latter part of the year, we can expect the 10-year U.S. Treasury rate to jump further, potentially leading to further cap rate stabilization if risk premiums compress, or higher cap rates if risk premiums hold pat or also  increase.”

Auction.com, LLC, is the nation’s leading online real estate marketplace. Founded in 2007, the company has sold over $30 billion in residential and commercial real estate assets. Auction.com has over 900 employees and headquarters in Irvine and Silicon Valley, Calif., as well as offices in Austin and Plano, Texas, Atlanta, Denver, New York and Miami. Visit www.auction.com for more  information.