The common barnyard chicken could provide some very un-common clues for fighting off diseases and might even offer new ways to attack cancer, according to a team of international researchers that includes a Texas A&M University professor.

James Womack, Distinguished Professor of Veterinary Pathobiology in the College of Veterinary Medicine & Biomedical Sciences, is co-author of a paper detailing the team’s work that appears in the current issue of PNAS (Proceedings of the National Academy of Scientists). Womack was a leader in the international effort to sequence the cattle genome in 2004. 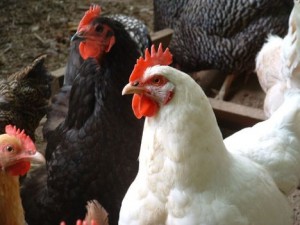 A Face Only a Mother or a Researcher Would Love

Womack and the team, comprised mostly of scientists from the Seoul National University in Korea, examined 62 White Leghorn and 53 Cornish chickens for diversity in NK-lysin, an antibacterial substance that occurs naturally in animals and is used as a method of fighting off diseases.

They were able to obtain two genetic variations of NK-lysin and the results offered two unexpected shockers:  both showed abilities to fight off bacterial infections and other diseases, while one showed it could successfully fight cancer cells as well.

“It took all of us by surprise,” Womack says of the findings.

“One of the genetic variations shows it has the ability to fight against cancer cells much more aggressively than the other variation. We certainly were not looking at the cancer side of this, but there it was.”

Womack says the team selected the two breeds because Cornish and White Leghorn chickens, found throughout most of the world, have relatively diverse genetic origins.

After conducting a DNA sequence of the chickens, the team found two variations of the genes that offered clues as to their protective ability to ward off infections.

“One form appears to be more potent in killing off cancer cells than the other, and that’s the one that naturally caught our eye,” Womack adds.

“This could lead to other steps to fight cancer or in developing ways to prevent certain infections or even diseases. It’s another door that has been opened up. We are looking at similar studies right now to see if this is possible with cattle.

“The next step is to work with other animals and see if similar variants exist. We need to look for any genetic similarities to the chicken variants and then determine if these variants affect the health of the animal, but this is an exciting first step in this direction.”