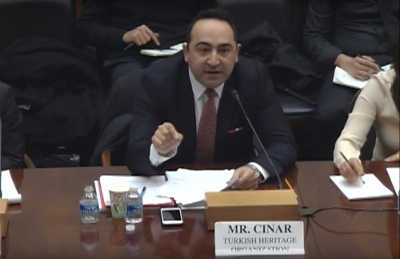 The Subcommittee on Europe, Eurasia, and Emerging Threats held a hearing to examine political trends in Turkey in 2016. The subcommittee invited witnesses: Ali Cinar, Executive Vice President of the Turkish Heritage Organization (THO); Nate Schenkkan, Project Director at Freedom House; and Gonul Tol, Director of the Center for Turkish Studies at the Middle East  Institute.

In his opening remarks Chairman Dana Rohrabacher emphasized the critical role that Turkey holds. Chairman said that “no one needs a reminder of the vital place that Turkey holds on the world stage. Our hope is that Turkey is not only stable and peaceful but also democratic and secular as well with a strong independent civil society and a government that upholds fundamental  freedom.”

Ali Cinar began his testimony by clarifying that PKK, PYD and ISIS are all considered terrorist organization in Turkey. Cinar added that PKK, which has been carrying out attacks on both civilians and security personnel and declaring autonomous administrations, continues to be the biggest national security concern for Turkey. Cinar informed the committee that HDP leaders are “engaging and motivating some Kurdish groups in southern part of Turkey to support the declaration of autonomy.” THO’s Executive Vice President also indicated that while dealing with a major terrorist organization at home, Turkey was providing critical assistance to Kurdish groups that are part of the coalition efforts against  ISIS.

Committee Members put special emphasis on Turkey’s border security with Syria and questioned the slow progress. Ali Cinar agreed that Turkey needs to improve its border security against ISIS militants and added that the cooperation between the U.S and other allies began to improve. Ali Cinar argued that intelligence sharing was the key to border security efforts and European authorities needed to do more to help  Turkey.

Chairman Rohrabacher concluded the hearing by reaffirming the need for peaceful solutions in resolving instability in the region. He indicated that there was debate on whether Turkey was becoming more democratic, but he hoped it was heading the right direction in which US-Turkish relations can continue to  grow.

The Turkish Heritage Organization (THO) is a non-profit organization founded to promote discussion and dialogue around issues of importance in the U.S.-Turkey bilateral relationship as well as Turkey’s role in the international community. Learn more at:http://turkheritage.org/ or on Twitter  @TurkHeritage.