The historic 255-67 vote by the House of Representatives to hold Attorney General Eric Holder in contempt of Congress for refusing to provide documents relating to the investigation of Operation Fast and Furious was “necessary for justice to be served,” the Citizens Committee for the Right to Keep and Bear Arms said. 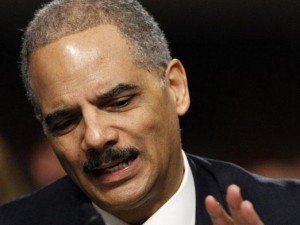 Holder repeatedly did not comply with a subpoena issued last October by the House Committee on Oversight and Government Reform. Instead, he successfully appealed to President Barack Obama to claim executive privilege at the last minute in an attempt to shield the documents from Congressional review.

SEE HOW YOUR MEMBER OF CONGRESS VOTED

“As the highest ranking law enforcement officer in the nation, the attorney general is not above the law,” CCRKBA Chairman Alan Gottlieb declared. “It should not have come to this. Eric Holder should have complied with the subpoena. If he had cooperated fully with the Fast and Furious investigation from the outset, none of this would have been necessary and he knows it.”

“The only conceivable reason that Holder and the Obama administration do not want to turn these documents over,” he said, “is that they contain damning evidence of either incompetence or complicity, or both.”  Furthermore, there are questions about whether the documents point all the way to the White House and even the Oval Office. After all, it is hard to come up with any other explanation for the President to exercise such an action.

“We are disappointed, but not surprised,” Gottlieb continued, “that Holder’s Democrat cheerleaders tried to portray this as a witch hunt, and tried to blame the Bush administration, but their arguments do not wash. This is about the rule of law and finding the truth about a horribly mis-managed gun trafficking operation, the murder of an American Border Patrol agent and what appears to have been a cover-up by the Department of Justice.”  In addition to an American agent, hundreds of Mexican lives were lost due to Fast and Furious.”

“We are proud,” Gottlieb noted, “of the 17 Democrats who joined the Republican majority on this vote. This was not about partisanship, but accountability and transparency. Fast and Furious has a body count, and so long as people provide cover to the attorney general, the blood is on their hands.”

With more than 650,000 members and supporters nationwide, the Citizens Committee for the Right to Keep and Bear Arms  is one of the nation’s premier gun rights organizations. As a non-profit organization, the Citizens Committee is dedicated to preserving firearms freedoms through active lobbying of elected officials and facilitating grass-roots organization of gun rights activists in local communities throughout the United States.