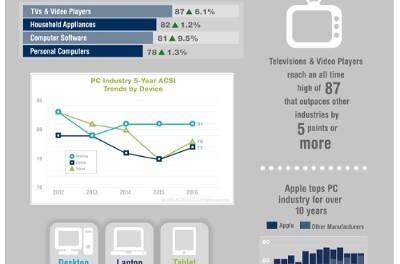 PCs gain 1.3 percent to 78 on ACSI’s 100-point scale. Tablets improve by 4 percent to 78, reclaiming a slight edge over laptops, which rise 3 percent to 77. Desktop computers maintain the highest score of  81.

“In an increasingly mobile world, smartphones are the biggest threat to PC sales, and tablets have not been the long-term panacea the PC industry was hoping for,” says Claes Fornell, ACSI Chairman and founder. “Interestingly, the two companies that lead in smartphone satisfaction also lead the PC industry, although they have very different strategies regarding the future of tablets. Apple is targeting business customers on the go with laptop-like features for its iPad, while Samsung tablets occupy their own space as devices for entertainment and browsing – not laptop  replacements.”

Apple remains the overall leader in the PC industry, unchanged at 84, but Samsung leaps 6 percent to 83 in its second year of ACSI tracking. Amazon, which manufactures only tablets, gets a 3 percent boost to 80, while Acer, ASUS and Dell tie for the next spot at 78. HP gains 5 percent to 77, followed by Lenovo (+3%) and Toshiba (+4%) at 76. The combined score for all other, smaller PC manufacturers falls 4 percent to the bottom of the category at  73.

Customer satisfaction with software rises 9.5 percent to 81 – a record high score for the category. Microsoft’s Windows 10 has been well received, raising the company’s ACSI score by 7 percent to 80. Smaller software makers (including antivirus software and TurboTax) gain 9 percent to a combined score of  81.

Customer satisfaction with household appliances climbs 1.2 percent to 82 as manufacturers invest in smart technology, and Asian and European manufacturers lead the industry. South Korea-based LG pushes the top score up 4 percent to 85, followed closely by German manufacturer Bosch and Samsung at  84.

Bosch improves the most, gaining 6 percent as it invests in the internet of things (IoT) to enhance the user experience. Samsung (+4%) also is improving customer satisfaction and quickly gaining market share. GE Appliances, recently acquired by Haier, is unchanged at 82, ahead of Electrolux, Whirlpool and the combined score of all other smaller manufacturers (all  81).

Smart technology and low prices lift customer satisfaction with televisions 6.1 percent to an ACSI score of 87, a new high for the category and 5 points ahead of any other ACSI industry. Functionality is improving as many TVs and video systems can connect to the internet, including platforms like Netflix, Hulu and  YouTube.

The ACSI report, which is based on 3,500 customer surveys collected in the second quarter of 2016, is available for free download  at http://www.theacsi.org/news-and-resources/customer-satisfaction-reports/reports-2016/acsi-household-appliance-and-electronics-report-2016.

No advertising or other promotional use can be made of the data and information in this release without the express prior written consent of ACSI  LLC.

About  ACSI
The American Customer Satisfaction Index (ACSI) is a national economic indicator of customer evaluations of the quality of products and services available to household consumers in the United States. The ACSI uses data from interviews with roughly 70,000 customers annually as inputs to an econometric model for analyzing customer satisfaction with more than 300 companies in 43 industries and 10 economic sectors, including various services of federal and local government  agencies.

ACSI results are released throughout the year, with all measures reported on a scale of 0 to 100. ACSI data have proven to be strongly related to a number of essential indicators of micro and macroeconomic performance. For example, firms with higher levels of customer satisfaction tend to have higher earnings and stock returns relative to competitors. Stock portfolios based on companies that show strong performance in ACSI deliver excess returns in up markets as well as down markets. At the macro level, customer satisfaction has been shown to be predictive of both consumer spending and GDP  growth.

ACSI and its logo are Registered Marks of the University of Michigan, licensed worldwide exclusively to American Customer Satisfaction Index LLC with the right to  sublicense.